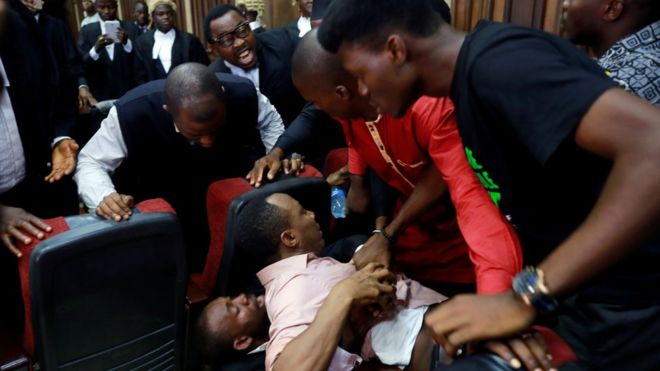 Human rights lawyer, Mr Femi Falana (SAN), on Sunday, refuted the Department of State Services’ claim that its operatives did not disrupt proceedings at the Federal High Court, Abuja, in their bid to re-arrest his client, Mr Omoyele Sowore, on Friday.

Falana, in a statement, said contrary to the DSS’ denial issued on Saturday, the leader of the DSS team of operatives, who invaded the court, tendered an apology for their conduct when summoned after the incident by the presiding judge, Justice Ijeoma Ojukwu.

Falana said this just as the United States expressed concern about the re-arrest of Sowore after a court had ordered his release.

The DSS had, on Saturday, said the circulation of a video clip on an attempt to re-arrest Sowore in the courtroom was a product of mischief.

The DSS Public Relations Officer, Dr Peter Afunnaya,  in a statement said the video was meant to serve as propaganda to bring the service to disrepute.

He had said when Sowore stepped out of the court and sighted operatives of the service on the premises, he ran back into the courtroom.

He said, “In a bid to shield him from an imaginary arrest, his uncontrollable supporters mobbed him while chanting ‘you can’t arrest him’, thus the pandemonium that ensued.”

But on Sunday, Falana said the inability of the DSS operatives to defend their conduct prompted their subsequent apology to the judge, who was made to adjourn cases on her list following the invasion of her courtroom by the agency’s operatives.

He described the statement issued by the DSS spokesperson as “self-contradictory” and “an unsuccessful attempt to absolve the agency of   responsibility  for the  invasion of the Federal High Court, Abuja Judicial Division, in general, the desecration of  the Court 7 presided by  Justice Ojukwu in particular,  as well as the illegal re-arrest of Omoyele Sowore.”

He stated, “By the advantage of information technology, the whole world has placed responsibility for the gangsteric desecration of the court on the DSS.

“The DSS cannot extricate itself from the abominable acts of December 6, 2019.

“When I informed the court that fresh charges were being filed against our clients and that they could be re-arrested, the prosecution denied the plan.

“As soon as the case was adjourned, the DSS pounced on Sowore and caused a disruption of the proceedings of the court.

“Having taken over the courtroom, Justice Ojukwu hurriedly rose and asked the registrar to adjourn all other cases.

“After the learned trial judge had risen for the day, she summoned the heads of the prosecution and defence teams to her chambers.

“When the lead prosecutor, Dr Liman Hassan (SAN), denied knowledge of the invasion of her court, she directed him to invite the head of the DSS team.

dailynaijamode - March 6, 2021 0
When talking about Beautiful and Curvy women, Africa is known to have an abundance of them. One of these women is Sanchi. She is not only Beautiful, she is one of Tazania's most Curvaceous...
Read more

No Bra Day: 15 Photos of Women without Bra Who Look Amazing

dailynaijamode - March 6, 2021 0
Wearing of bra is a good and decent way of dressing for a lady in order for her to fully cover her body but most women complain that wearing bra is very uncomfortable and...
Read more

dailynaijamode - March 6, 2021 0
Most soldiers lose their attractive and handsome bodies after going through this form of training. Soldiers are vital to a country's survival, and their work and responsibilities cannot be overstated; as a result, they must...
Read more

dailynaijamode - March 5, 2021 0
Most of us know Rosy Meurer, the Nigerian actress who became more popular following the marital saga between Olakunle Churchill and Tonto Dike. It happened that Rosy seemed to be the bone of contention between...
Read more
https://wlbet9ja.adsrv.eacdn.com/C.ashx?btag=a_152489b_915c_&affid=9196&siteid=152489&adid=915&c=

No Bra Day: 15 Photos of Women without Bra Who Look...

No Bra Day: 15 Photos of Women without Bra Who Look...