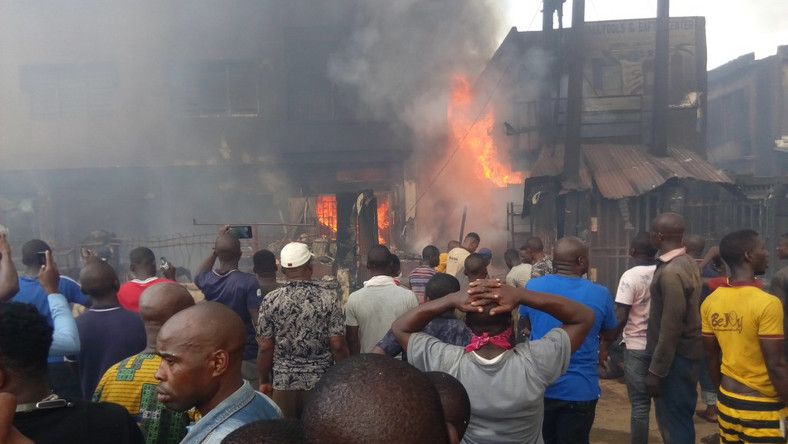 Bodies of two individuals who died in the Onitsha tanker fire accident, Anambra State, are still unclaimed in a hospital in the area where they were rushed to after the incident.

Ten persons were said to have been admitted to the hospital, out of which six were treated and discharged, while two are still in the hospital.

Those still in the hospital are Blessing Egbogu and Oluchukwu Ani from Imo and Enugu states respectively.

The Medical Director of the hospital, Dr. Emeka Eze, stated this while conducting a governorship aspirant of the Peoples Democratic Party for the 2021 election in Anambra State, Dr. Obiorah Okonkwo, round the hospital.

Eze said the victims’ bills were being taken care of by the Anambra State government.

Okonkwo, who visited the hospital and the burnt Ochanja Market, gave the patients financial support and promised that his foundation, the Pro-value Humanity Foundation, would procure an ambulance for the market.

Addressing the traders at Ochanja, Okonkwo said in spite of the losses, Anambra people should be grateful to God because the casualty could have been more if the destruction had started from the point where the tanker spilled its contents.

He promised to join hands with other Nigerians who had earlier made pledges to provide succour for the victims of the tanker fire to enable them rehabilitate their businesses.

He said, “It could have been worse, considering the magnitude of the destruction and the miracle that happened in front of Toronto Hospital along the Upper Iweka Expressway, some kilometers from where the havoc took place.”

He said the incident had exposed the neglect of one of Africa’s biggest commercial cities, adding that Onitsha needed to be properly fixed and organised, especially when it is one of the greatest sources of the state’s Internally Generated Revenue.

“The amenities in Onitsha must be upgraded and all the infrastructure properly secured.

“There is no security here, which, to me, is a human error. Onitsha market should be redesigned and provided with its needs.

“I grew up in this city. By the time Onitsha market was adjudged the best in West Africa, there were no such facilities in the whole of Dubai,” Okonkwo added.