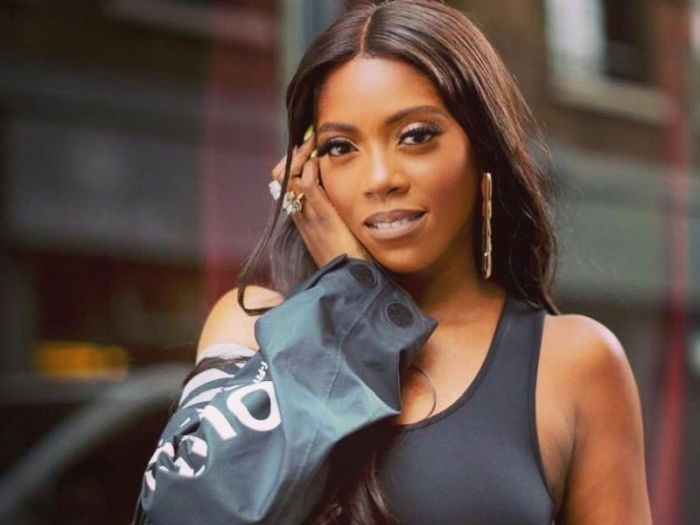 Tiwa Savage kept a lot of people awake on the night of Thursday, October 10, 2019, when she shared a video of three young ladies insulting her at a popular radio station in Lagos.

The three young ladies were seen saying some derogatory words about the music star. Tiwa Savage went on call out the ladies in the video over their comments. It didn’t end there she advised them to be bold enough to say those same words to her when they meet her personally.

As usual,’The Republic of Twitter’ has been reacting to the now-viral video. For some Tiwa Savage has always wanted to look for an avenue to express the reasons why she doesn’t relate well with other females, while for another set, it was no big deal as people are free to critics celebrities. Here is how Twitter is reacting to the video Tiwa Savage shared on her Instagram page.

What Happened with Tiwa and City fm OAP’s is typical radio shit..They dont necessarily need to like @TiwaSavage just because they are doing their jobs..Other OAP’s do this same shit too. These ones were just unfortunate

How did Tiwa get the video? 🤔🤔 pic.twitter.com/Lo20m32SVl

Lmfao are you guys about to turn on Tiwa Savage for posting the video?

They got caught, and she has a right to post the video abeg. They will take this embarrassment and live with it.

Besides, it will blow over in its own time.

Women supported Tiwa when her ex husband disgraced her publicly, when these ashy men called her unprintable names for featuring in Wizkid’s video, women were behind her cheering her. Drag the people who insulted you but don’t fucking start this women are women’s problem abeg

Women empowerment not friendship empowerment. They’re allowed to have their personal views of Tiwa, doesn’t mean they won’t push her music, I mean they don’t have a choice. But we need to chill out with this idea that women have to like each other to be empowering.

Victoria Kimani attributed Tiwa Savage to a slut and Seyi Shay joined her during that saga, also got a load of hate speech cause of Wizkid & her marriage among others.

If Tiwa says women hate her the most, she’s not wrong cause she’s the one on the receiving end and not you.

Love this TL so much! Last week, Tiwa was star girl with everyone defending her against Charles ancient of days, today she’s the one receiving backlash.

Gbas gbos, nobody is above dragging.

I love Tiwa but it’s okay if other women don’t like her . Not everything is fight or jealousy .

Can Tiwa beat her chest and say that she has helped women in the music industry ?

She doesn’t owe them that neither do they owe her their love or support .

Tiwa, Simi, Yemi Alade, all three of the biggest female artistes from Nigeria have made comments about women hating each other. Asides from being an indicator of Nigeria’s malecentric culture, it’s also helps us understand why there is so little female representation in Nigeria’s

Are those women gossiping about Tiwa jealous? Yes.
Are women women’s greatest enemies? No, Men are.

Tiwa loves women so much but they don’t love her back 😩😩. How many women has she empowered please??? How many women in the industry are there because she put them on??

OAPs at CityFM seen slandering Tiwa Savage right after granting them an interview on her new journey and music 49-99. Cameras caught the duos off guard saying;
– Tiwa Savage is a fool
– Tiwa shines on other artistes music
– Tiwa Savage can’t write
– Yemi Alade would beat her pic.twitter.com/b1dh51hPbJ

Lol Tiwa should I leak the video of my compound boys talking shit about you? You are a celebrity who has even more female fans than male fans ffs. Not every woman will like you just because you are a woman and that’s just that. It doesn’t mean women hate women.

Female Nigerian artistes need to collaborate often to support themselves.

This Tiwa Savage and City FM OAPs gist is not just about women hating women. People hate one another irrespective of gender,they are so many people you least expected who can kill you, if they have the opportunity. This is just one of the reasons why you need to be prayerful and

Tiwa Savage has been dying to fuel the “women hate women” narrative after she made so much fuss about it months ago.
Tiwa Savage’s biggest supporters are women but let’s ignore that and focus on the 3 who called her a fool.

The leaked video of City FM OAPs gossiping Tiwa is just another proof that
– Not everyone who smiles with you loves you.
– your colleagues are not your friends.

So always Watch your back, mind your business, focus on positive energy and keep succeeding.

I heard those OAP’s video is from last year and someone in the office leaked it to Tiwa Savage. Truth is a lot of us probably say worse about artists even here on twitter but Camera’s aren’t looking. So is it really fair that you can trash talk artists but they can’t?

City FM OAPs were gossiping Tiwa, the Radio Station’s Mics and Camera captured this and Tiwa gets the video before the Radio Station & it’s management actually did. Imagine paying someone to sabotage your own company? The Camera/Studio crew deserve to be sacked first.

Rihanna has never written A song on her album and yet she’s celebrated. It is not a sin if an artiste does not write song, & unfortunately Tiwa savage was signed by Sony as a songwriter bk in the days. All these 3 City FM OAPs are hating 4 no reason, lik they even call her a fool

The amount of hate, jealousy and envy Tiwa Savage faces, most especially from women is terrible. And whenever she says this, women attack her but she’s saying her truth.

Those OAPs gossiping about Tiwa were so unprofessional…

I mean where did they drop the locally Made British Accent they use on Air.😂😂🤣

Had to be caught unfresh..
Not how Stars do…

I can bet Tiwa Savage saw that tweet where a man put her on a blast on here, saying she doesn’t have sex appeal and is doing way too much to stay relevant. Imagine if say na woman talk am. The agenda would’ve agended.

Some women preach support for other women, it’s sad to see the hate coming from fellow women

MI & Vector are dissing each other which is part of Rap Culture while Women were Gossiping Tiwa Savage with Hate. It’s Unintelligent to compare the 2 Scenarios. https://t.co/bY4u40VoJh