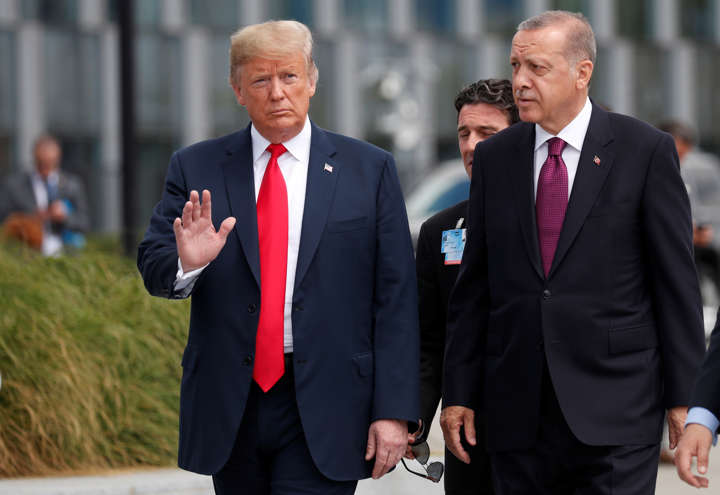 Mr Trump, had in the letter dated 9 October, and sent after US troops were pulled out of Syria, told Mr Erdogan:

BBC reports that the letter was “thoroughly rejected” by Mr Erdogan. On the day the letter was received, Turkey launched a cross-border offensive against Kurdish-led forces. .

Mr Trump said in the letter. .

Mr Trump had warned Turkey not to pursue the Kurdish forces, but the country said America’s withdrawal would leave the Turkey-Syria border unprotected from Kurdish rebels. .

Turkey has long seen the Kurdish groups as terrorists and has blamed them for attacks within its territory. Turkey, which like the United States is a member of the North Atlantic Treaty Organisation of military allies, dismissed Mr Trump’s warning and proceeded with offensive against the Kurds. .

But in an October 9 letter to Mr Erdogan, Mr Trump evoked the verdict of history and threatened harsh consequences unless it ceases all hostilities.

BBNaija:Watch Moment Housemates Gleam With Joy After Receiving Shout Out From Fans Via Videos...

dailynaijamode - August 12, 2020 0
The videos calmed the raging tension in the house as housemates were spotted gleaming with joy. https://www.instagram.com/bbnaija_lockdowngist/?utm_source=ig_embed&ig_mid=EABA99A9-F567-4BB4-BEB3-9E77E7EAAFE8
Read more

“I Love All Housemates Equally”- Mercy Eke Reacts To Comment After She Calls BBNaija...

dailynaijamode - August 12, 2020 0
BBNaija season 4 winner, Mercy Eke has responded to the comments and reactions that trailed her live video which sparked public outrage.In the video, she was agitated and stated that people should leave her out...
Read more

dailynaijamode - August 12, 2020 0
Rita Daniels, mother of Nollywood actress, Regina Daniels has been appointed as the Delta state Assistant Treasurer of the People Democratic Party (PDP).She gave the announcement in an Instagram post recently, where she appreciated...
Read more

dailynaijamode - August 12, 2020 0
Sumner Redstone, one of the towering figure in media who built his father’s drive-in theater business into an empire that included Viacom, Paramount Pictures, CBS Corp and MTV is dead at the age of 97.   National...
Read more

BBNaija:Watch Moment Housemates Gleam With Joy After Receiving Shout Out From...

“I Love All Housemates Equally”- Mercy Eke Reacts To Comment After...

BBNaija:Watch Moment Housemates Gleam With Joy After Receiving Shout Out From...

“I Love All Housemates Equally”- Mercy Eke Reacts To Comment After...

dailynaijamode - August 12, 2020 0
Open chat
Share Your Viral News With Us