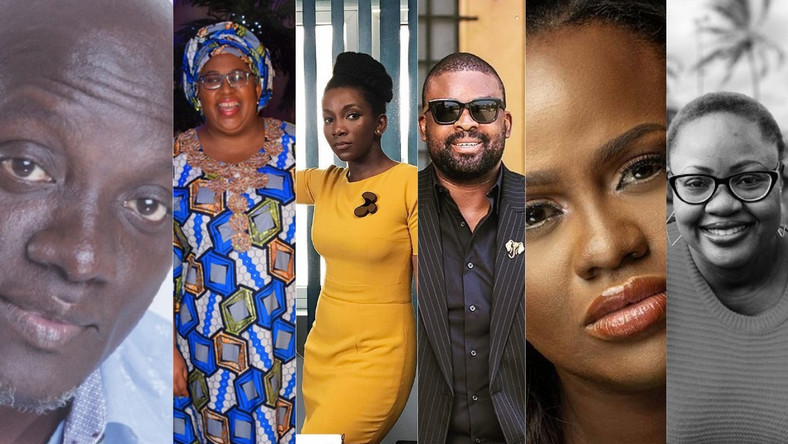 Presumably not as frequently as you would consider its director or leading actor. But, film producers are vital to the development of a picture.

Producers are at the front line of production from its inception and even after it has lived through its glory days.

Nollywood, as it is, owes its dance with the stars to the foresight of ambitious filmmakers who have sought to change the industry’s preexisting standard by setting out to rewrite the narrative.

In no particular order, this selection spotlights filmmakers for their distinctive storytelling style and how the Nollywood industry has evolved through their artistic expressions. It cuts across feature films, TV, Web series alongside a special mention.

Mildred Okwo‘s Nollywood film making career span nearly two decades and in this length of time, she has strove for high quality production standards. The film producer and director is credited for giving Genevieve Nnaji her career defining moment in her debut feature film ’30 Days’ (2006), an action drama that saw Nnnaji wield a gun like a pro.

Rita Dominic was next in line for some magic with Okwo’s ‘The Meeting’ (2012) where she played the supporting role of an obnoxious middle-aged secretary. For both actors, these movies roles were career savers.

Despite her revolutionary film credits, the award-winning filmmaker’s exploration of the film noir genre in her upcoming psychological thriller, ‘La Femme Anjola’ (2020) is the reason for the Pulse spotlight.

The intricacies of this genre goes beyond the creation of a troubled lead character. It takes into consideration cinematographic elements, plot style and representations that are scarcely explored in Nollywood.

The teaser hints of an experimental project that’s billed to rock Nollywood to its core.

Nollywood was not exactly starving when Adetiba’s ‘King of Boys’ premiered in 2018. The box office numbers had gotten a face-lift by the brave minds behind ‘The Wedding Party’. But, KOB’s arrival could not have been more messianic.

The Wedding Partys had become the golden image with producers unconsciously beginning a contest of the next to snatch back the crown for the next highest grossing romantic comedy. It did not matter how downrightly outrageous some of the stories were, as long as they had the key ingredients- comedy and romance, filmmakers were content to pursue with passion.

Then came the Adetibas and their well marinated idea that finally usurped the reigning genre. Adetiba’s crime thriller was a gamble that redefined the Nigerian box office. Finally, the industry could boast of a non slapstick highest grossing film. Its first since the ‘The Wedding Party’ (2016).

Adebitiba is also credited as director of ‘King of Boys’, ‘The Wedding Party’ and over a handful of some of the most applauded music videos in the country.

Afolayan’s film making career boasts of a number of colorful feathers. His second feature film, ‘The Figurine’ (2009) is generally believed to be the movie that changed the face of Nollywood cinema .

The filmmaker’s 2014 psychological thriller, ‘October 1’ became the first Nollywood film to be acquired by Netflix and among the first to be acquired twice by the streamer. Afolayan’s pictures do not compromise on production quality. The producer once disclosed that he scarcely reuses vital equipment in his productions.

Play Network studio’s ‘Living in Bondage’ sequel was in production hell three years after Charles Okpaleke acquired its rights in 2015. It took hiring Nollywood’s Stephen Spielberg to right the wrongs and kick start production in 2018.

Steve Gukas was the ray of sunshine that the production of ‘Living in Bondage : Breaking Free’ (2019) required. He brought on the experience of making large budget productions to this development and the rest they say, is history.

Prior to the Living in Bondage production, Gukas had produced the award-winning 93 Days, a movie based on the Ebola outbreak.

Not a lot of filmmakers quite understand the workings of Nollywood like Nnaji does. Her claim to fame is backed by nearly two decades of being active in the industry. She’s lived through several phases of the industry’s development and is credited with being one huge supporter of independent producers.

Nnaji’s support, arguably as a result of the infamous 2004 G8 ban, invariably led to her debut outing as a filmmaker in 2015.

Her first film as a film producer, ‘Road to Yesterday’ starring herself and Oris Erhuero was received warmly. Its success lit the fire for her directorial debut, ‘Lionheart'(2018)

Debatably, ‘Lionheart’ ‘s success story is straight from Gusteau‘s iconic ‘anybody can cook’ motto as it set a new standard for Nollywood. Its Netflix original win and Oscar submission set the dice rolling for what will become a new wave of Nollywood.

James Omokwe‘s genius has impacted the development of some of the most critically acclaimed Nollywood TV series. His 2018 produced series, ‘Ajoche’ warmed its way into the hearts of film lovers who stayed glued to the 260-episode show on aired weekly Africa Magic.

‘Ajoche’ not only endeared itself to series lovers for its stellar cast, its production quality was first-class and quite frankly, uneasily unrivaled in its genre. Omokwe also produced Africa Magic’s ‘Unbroken’, a telenovala styled series.

Oge Obasi is a seasoned TV and film producer who’s redefining the Nollywood narrative against all odds. For arguable reasons, art films are hardly bestsellers locally but are always well received internationally. The zero budget ‘Ojuju’ and its success was a statement in favour of the quality of Nollywood’s content over the size of its budget.

The Obasi produced short film ‘Hello, Rain’ (2018) has impressively positioned itself as one of the few afrofuturistic films from Nollywood.

The Trino duo’s debut feature film, ‘Sylvia’ (2018), a psychological thriller starring Zainab Balogun as its leading lady, was a spectacular picture that restored some faith in Nollywood. While the documented producer credit goes to Ekene Mekwunye, the pre-production for the critically acclaimed thriller was shouldered by Uche Okocha.

Okocha oversaw scripting, budgeting, hiring crew including the smart decision of hiring director, Daniel Oriahi . He handed over the reins of production to Ekene Mekwunye at its principal photography stage.

The Femi Ogunsanwo produced ‘Ojukokoro’ (written and directed by Dare Olaitan) is till date regarded as one of the classics of new Nollywood. Make no mistake, ‘Ojukokoro’ (2016) was no mega budget film. Yet, it proved yet again, that the industry’s problems had some to do with money but not all.

Jade Osiberu‘s high grossing feature films are an impressive addition to the industry. But, her web series are the reason for this spotlight. The award-winning producer, screenwriter and director is credited for producing some of the most acclaimed web series in Nollywood’s history. Ndani TV’s ‘Rumour Has It’ and ‘Gidi Up’ are among the filmmaker’s most applauded projects.