The decision of the Federal Government of Nigeria to enforce a 14-day lockdown in the Federal Capital Territory, Lagos state and Ogun state, did not have the warmest of receptions. In fact, many Nigerians took to Twitter to complain about how this could be equivalent to putting the economy on a lock-down as well, particularly since the affected states are critical economic locations in the country.

Ten days into the lockdown, Nairametrics looks at how top Chief Executive Officers have spent their time in this period. We have considered this list in no particular order.

This CEO of Access Bank Nigeria Plc has definitely made great use of the lockdown. As a member of the Private sector Coalition Against COVID-19 (CACOVID), Wigwe has used his social media handles to push the StaySafe and WorkFromHome campaign.

From his Twitter handle @HerbertOWigwe, he has continued to advocate social distancing, washing of hands and working from home.

In these unprecedented times, these things are critical: Work from home; wash your hands thoroughly; practice physical distancing and call you aging loved ones (daily). 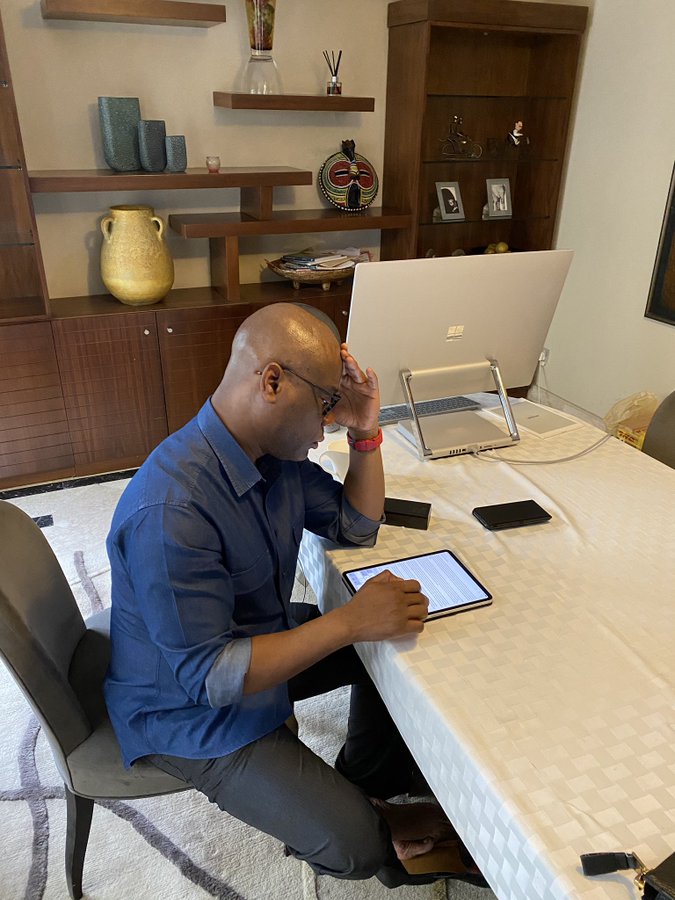 523 people are talking about this

Most recently, he joined the CACOVID #stayingalivechallenge, and had to share with Nigerians how he was keeping busy while staying at home. While nominating 5 others on Twitter to take up the challenge.

Members of @cacovidng nominated me for this #stayingalivechallenge. I’m currently reading a book on African art.

What are you doing to stay alive? I nominate @jidesanwoolu @realFemiOtedola @Uzoma_Sparkle @Ebuka & @iamdbanj to share what they’re up to. 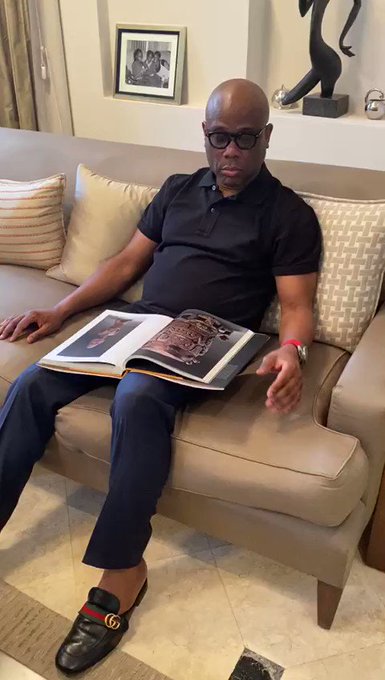 190 people are talking about this

Group Managing Director and CEO of First Bank Nigeria Plc, Adesola Adeduntan has equally been busy while complying with the lockdown directives.

Adeduntan has, over the past 10 days, advocated alternate banking channels for customers in line with the sit-at-home directive of the federal government, in addition to promoting the e-learning platform launched for students, amid the coronavirus outbreak.

In the bid to lighten the mood during the lockdown, he also participated in the #StayingAliveChallenge from the Private sector coalition against COVID-19.

Through his Instagram handle, adeduntansola, he shared how he was spending quality time with his children, and in the spirit of the game, he passed on the challenge to 5 nominees.

Who would have thought that the 51 years old Chief Executive could be so playful?

Uzoka became Group Managing Director and Chief Executive Officer of United Bank for Africa Plc in 2016, after serving as an Executive Director for six years.

He won the “BusinessDay’s Bank CEO” award for year 2019, in recognition of his achievements for the last three years in the bank, particularly in turning the fortunes of the bank around within the first year of becoming CEO.

Amidst the COVID-19 pandemic, UBA presented N1 billion to Lagos state government to support the fight against the virus, and also donated N500 million to the FCT through the UBA foundation.

Uzoka has himself not said much about the pandemic or the lockdown.

He appears to be engrossed in his job, governing the corporate empire whose rise or fall rests on his shoulders.

Fondly called Abu, the inspirational Chief Executive of Sterling Bank has not been left behind. Though he does not say much about staying at home, or otherwise, Suleiman has used his free time to push the recently launched 1billion naira health workers’ fund.

In series of tweets on his handle @suleimana, he has continued to encourage Nigerians to support the healthcare workers and ensure that they do not suffer needless losses as a result of the pandemic.

Please support our health workers directly involved in containing the Covid19 pandemic. The fund will pay hazard allowances to this category of people who are now at risk of being infected.

Sterling seeded the fund with N25m

Give a little: Put a smile on someone’s face.

451 people are talking about this

The fund is being coordinated by the Sterling One foundation, and Sterling Bank Plc already donated N25 million to kick-start donations.

Uzoma Dozie followed in his father’s footsteps when he decided to set up Sparkle after overseeing a smooth merger between Diamond Bank and Access Bank Plc. Sparkle is a mobile-first platform which allows retailers to set and achieve daily objectives and scale their businesses. It provides lifestyle services including inventory management, invoice statements, FOREX services, etc.

Dozie wasted no time in replying the #StayingAliveChallenge thrown to him by Herbert Wigwe.

He shared on his twitter handle@Uzoma_Sparkle, his experiences learning how to fish and climb using virtual reality, and as usual, passed on the baton.

Members of @cacovidng nominated me for this #stayingalivechallenge. I’m currently reading a book on African art.

What are you doing to stay alive? I nominate @jidesanwoolu @realFemiOtedola @Uzoma_Sparkle @Ebuka & @iamdbanj to share what they’re up to.

I am using virtual reality to learn how to fish , climb and so much more … nominating @ChrisUbosi @yorwerth @iChexo @Jacky_Dana @onwuanibe1 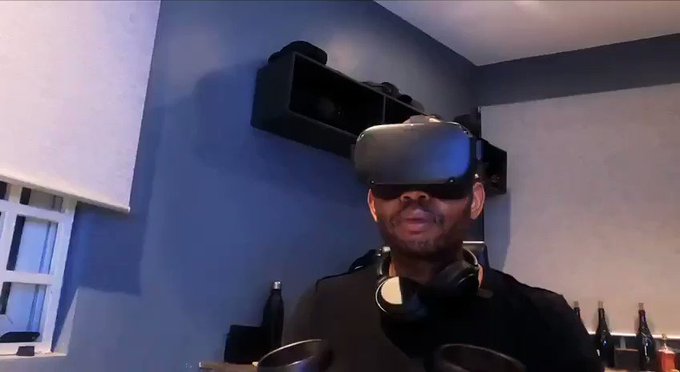 Agbaje became MD/ CEO of GTBank when Tayo Aderinokun passed on in June 2011. He has held the position since then, winning several awards for the bank including Best Bank in Nigeria by Euromoney, and African Bank of the Year by African Banker Award.

In the wake of the COVID-19 outbreak and subsequent spread, Segun Agbaje has demonstrated lots of patriotism to Nigeria and Lagos state, where the bank’s headquarters is located.

Agbaje is a key part of the CACOVID, and also advocates strict adherence to the social distancing and hand washing directives given by the government to check the spread of the virus.

He made a personal donation of N1 billion under the auspices of the CACOVID relief fund, while the bank donated a 100-bed intensive care facility to the Lagos state government, to compensate for the huge gap in required number of facilities for treatment, isolation and testing.

Agbaje is, undoubtedly, eager for the COVID-19 pandemic to come to an end so that he can fully return to his business of making more money for stakeholders and keeping customers satisfied.

Jubril Adewale Tinubu is the CEO of Oando Plc. He has used the lockdown period to share messages of hope via his social media handles, encouraging Nigerians to see themselves as being safe at home, rather than stuck at home.

It’s normal to feel anxious and worried about the ongoing pandemic and lockdown, due to a lack of control over the situation. What’s important is having an open mind towards what we can control – which is our attitude! #OandoCares #COVID19 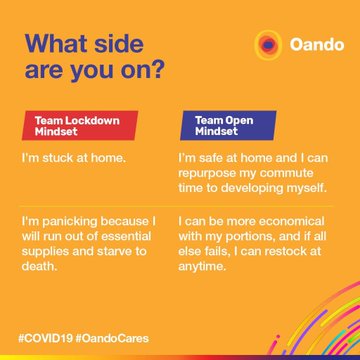 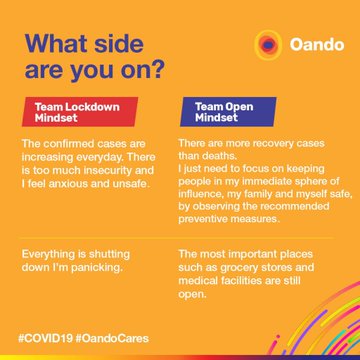 He has also shared and retweeted several videos in recent tweets, targeted at educating and enlightening nigerians on the pandemic and how to stay safe.

It is important that in our fight against the #COVID19 pandemic,we leave no one behind/uninformed about the virus and how to contain it. With this in mind,we decided to create a series of videos to ensure we play our part in educating every Nigerian in a language they understand. 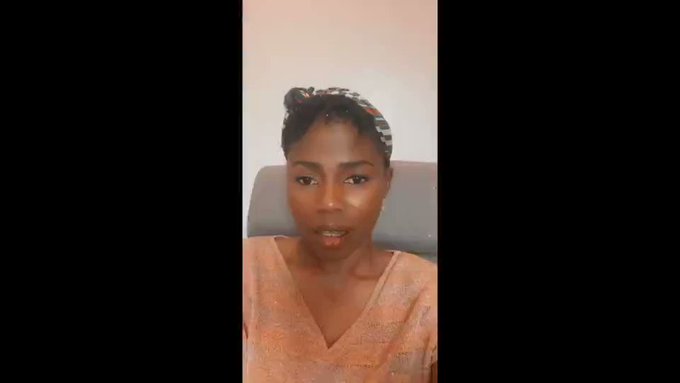 21 people are talking about this

Tinubu is no doubt, taking a COVID-19 enlightenment challenge, all by himself.

Recently, Zenith Bank was recognized as the Most Valuable Banking Brand in Nigeria, the third year in a row, in the Banker Magazine “Top 500 Banking Brands 2020” and as the Bank of the Decade (People’s Choice) at ThisDay Awards 2020.

These awards, no doubt, testified to Onyeagwu’s managerial expertise and experience, even in the face of the peculiar Nigerian environment.

Besides speaking at the launch of the automated voice banking service this week, Onyeagwu has been quite silent since the lockdown.

Zenith bank however, donated N1 billion naira to the CACOVID relief fund as part of its corporate responsibilities and to support government efforts. The bank also donated N100 million to provide relief for the victims of the Abule-ado explosion in Lagos state, recently.

Adetokunbo Abiru, is known as the CEO who came into the limelight at the wrong time and for the wrong reasons – Skye bank’s financial crisis.

Abiru was able to prove his mettle when he moved the new Polaris Bank from the brink of total collapse – never mind that he watched it get there in the first place – to the path of total recovery.

Under his leadership, the bank recovered over N200 billion of outstanding bad loans within a short period, and restructured agreements with most of the chronic bad debtors. The bank also invested in technology within the period, diversifying its service models and widening the range of channels for customers.

Known for his no-nonsense approach, Abiru is one CEO that manages to keep off the public radar. Not much is known about how he has spent the last 10 days of the lockdown.

Ayeyemi assumed the office of CEO of Ecobank in 2015, after a successful banking career with Citigroup, as CEO of the Sub-Saharan division.

This is another Chief Executive who likes to keep his private life private, so he has not been in the public much since the lockdown, both online and offline.

He however,  took up the washing hands challenge recently and posted a video on his twitter handle, @AAyeyemi, showing Nigerians how to wash their hands and keep safe amid the COVID-19 pandemic.

I just joined the #SafeHandsChallenge 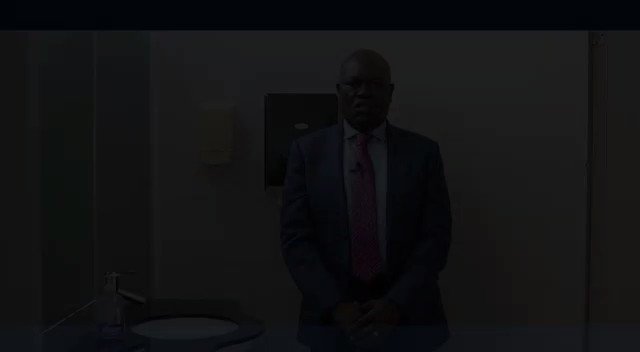 28 people are talking about this

He has also been promoting the StaySafeNigeria media campaign which Ecobank launched in March as part of its corporate actions to support government efforts to contain the pandemic.

Nairametrics had reported recently that the bank failed to declare dividends or bonuses for shareholders for the fourth year in a row, so it is likely that the CEO is staying away from public glare, while trying to fix things, even as the bank scaled down operations in line with government directives.

Yinka Sanni has about three decades of corporate experience in the banking sector, with a significant number of those years spent in the Stanbic IBTC Group.

The CEO of Stanbic IBTC bank likes to keep his personal life shrouded from the public glare.

What he has not kept secret is the fact that he is a strong advocate of social distancing and other directives of the government to contain the spread of the coronavirus.

In recent times, he has continued to retweet posts from the Atedo Nari Atowari Peterside (ANAP) foundation, especially those calling for public enlightenment on #StayAtHome.

Re COVID-19, in my opinion, this 5 minute video is the best I have seen in terms of the explaining the urgent need for Social Distancing and an early Lockdown. Share with friends and family. It will save lives. https://twitter.com/anapfoundation/status/1242813046273310721 …

Anap Foundation COVID-19 Think Tank recommends that you watch this video. If nothing else convinces you on the immediate need for a Lockdown, then this should. cc @AtedoPeterside #CoronaVirusInNigeria #StayAtHomeNigerians #AnapFoundationCovid19ThinkTank 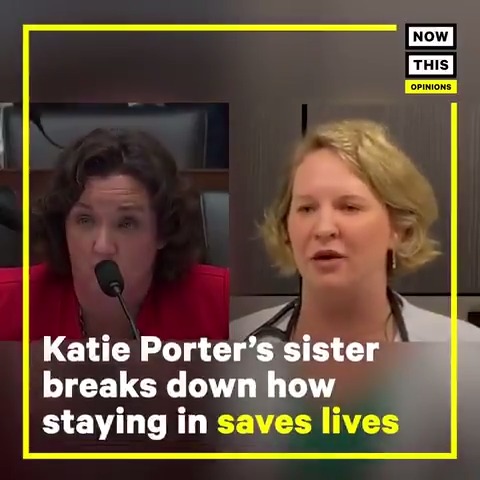 74 people are talking about this
SOURCE:NAIRAMETRIC
CopyAMP code
Click the link below to join our telegram and watch exclusive videos
Join Our Telegram And Enjoy Exclusive Videos