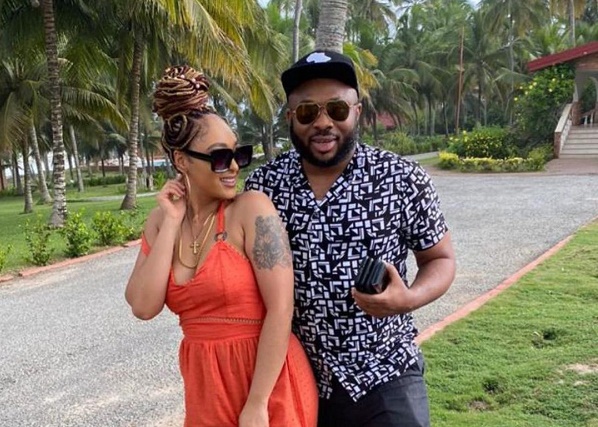 Rosy Meurer was Churchill Olakunle’s former personal assistant in 2017 before they got married.

The Nation had reported Meurer was at the centre of Churchill’sdivorce brouhaha’ with Tonto.

Tonto parted ways with Churchill in 2017 just two years after their wedding in 2015 over allegations of domestic abuse and extra-marital affairs.

They have a son – King Andre Dikeh together.

Sharing the exciting news on Tuesday, Olakunle via his Instagram page @olakunlechurchill described it as a ‘moment of bliss and celebration’.

“It’s a moment of bliss and Celebration to us as I announce the coming of *King Churchill Junior,* …from my formative years I have always had the royal tag of “King” for my kids to be greater than the father,” he wrote.

“Ahead of mother’s day, I say big congratulations to my lovely wife for this great testimony. This decision I made two years ago is not a mistake but a divine ordination.”

“My little King, welcome to the world, a great addition to the family. You shall grow with the wisdom of God, divinely protected and flowing with the oil of Grace.

“My son “KING CHURCHILL “, my earnest prayer is that you will be greater than your father and your peers in all attainments. Thanks to everyone for the prayers, support and love!!!”

Meanwhile some Nigerians have taken to social media to react to the naming of his baby boy as ‘King Churchill Junior’.

Uloma on Twitter @ulxma said: “Tonto’s son’s name is King. First they made her look insecure for suggesting that Rosy Meurer was his side chick. Then they’re now married. And now he’s naming this second boy after Tonto’s son to spite her. She lives rent-free in their heads.

@AriEmpire_ said: “Tonto Dikeh definitely lives rent-free in Churchill’s head cos what is this nonsense

@RichyX11 said: “Tonto’s son is King Andre Omotayo… This one is King Churchill. Like he said, he’s always loved the king name and he somewhat gives it more as a title than a name to his kids as he explained. Don’t see how that means Tonto lives in his head.

@ThatEnuguDude said: “There could be a possibility that Churchill was really struggling in the hands of Tonto and wanted genuine peace of mind.”