It has been revealed in newly released documents that the Secret Service visited Eminem over ‘threatening lyrics’ against Donald Trump and his daughter Ivanka on his 2017 Revival album.

The agents reportedly visited and spoke with the legendary rapper in January 2018 about his track ‘Framed,’ which they say showed the star ‘exhibiting inappropriate behavior’.

The authorities said Eminem, 47, ‘threatens protectee’ in the song which speaks of kidnapping Ivanka, 37, in his car trunk.

Back in August 2018, Eminem appeared to confirm the Secret Service visit in the song The Ringer.

In the song, he rapped: ‘Cause Agent Orange just sent the Secret Service, To meet in person to see if I really think of hurtin’ him, Or ask if I’m linked to terrorists, I said, “Only when it comes to ink and lyricists.”‘

Then in an interview with Sway Calloway he said: ‘They came to my studio, yeah. They were basically asking me questions about my lyrics to see what the intent was behind them and if I was making an actual threat or just expressing myself.’

A Freedom of Information Act request filed by Buzzfeed later confirmed that the Grammy award winner met with agents. 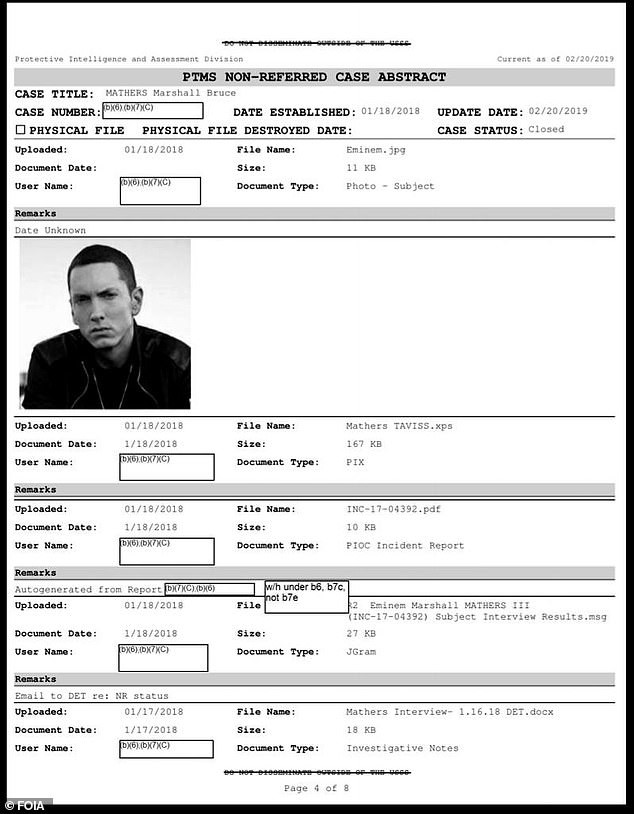 On the controversial song and visit to Eminem, Secret Service documents state: ‘The song was about a murder that he could remember and must be ‘framed’ with the specific lyrics, ‘Donald Duck’s on as the Tonka Truck in the yard.

‘But dog, how the f*** is Ivanka Trump in the trunk of my car? … ‘ cause I feel somewhat responsible for the dumb little blonde Girl, that motherf***in ‘ baton twirler that got dumped in the pond, Second murder with no recollection of it .’

When Trump did not react to earlier jibes, Eminem said: ‘I feel like he’s not paying attention to me. I was kinda waiting for him to say something, and for some reason, he didn’t say anything.’

The document states: ‘At the conclusion of the interview, Agents again offered to answer any questions. It was also explained that any additional questions about this investigation should be directed to the USSS [United States Secret Service] Office of Government and Public Affairs. Counsel then escorted Agents from Mather’s office.’

The case was non-referred, the documents confirm.

See  the full ‘threatening lyrics’ that saw Eminem interviewed by the Secret Service.

Woke up, it was dawn, musta knew somethin’ was wrong

Donald Duck’s on, there’s a Tonka Truck in the yard

But dog, how the f*** is Ivanka Trump in the trunk of my car?

Must go above and beyond, ’cause it’s incumbent upon me

Plus I feel somewhat responsible for the dumb little blonde

Girl, that motherf***in’ baton twirler that got dumped in the pond

Second murder with no recollection of it