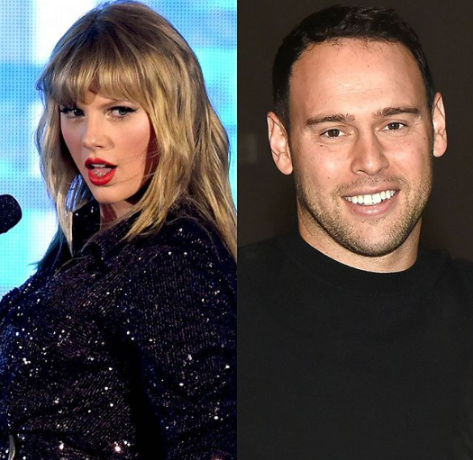 Scooter Braun has finally spoken out about his feud with Taylor Swift.

Back in June, Taylor Swift accused Scooter Braun of bullying after he purchased Big Machine Records, which owned all of her back catalogue of songs. She claimed she wasn’t allowed to buy the masters of her work (read here) and was “banned” from performing some of her old songs at the American Music Awards (read here).

Scooter has remained silent since and is speaking out for the first time. In his response, he denied banning her from performing her song at the AMAs.

Scooter, 38, told the Hollywood Chamber of Commerce State of the Entertainment Industry Conference: “I haven’t talked about this in six months, not once. I haven’t made a statement about it and that’s hard, because when you have a lot of things being said and a lot of different opinions — yet the principals haven’t had a chance to speak to each other — there’s a lot of confusion.

“I think that I’m not gonna go into details here because it’s just not my style. I just think we live in a time with toxic division and people thinking that social media is the appropriate place to air out on each other and not have conversations. I don’t like politicians doing it, I don’t like anybody doing it, and if that means that I gotta be the bad guy longer, I’ll be the bad guy longer. But I’m not gonna participate.”

“I think a lot of times things are miscommunicated, but I believe that people are fundamentally good. I also think there are a lot of real problems in the world, and I think that these problems that are being discussed can be discussed behind closed doors and figured out pretty easily.

“It’s something I’ve been wanting to do for six months and it’s hard because I can handle it pretty easily.”