Rapper, Tory Lanez responds to being charged with felony assault in Megan Thee Stallion shooting as his father pens message of support to him

Tory Lanez has spoken out after being charged with assault over the shooting incident involving fellow rapper Megan Thee Stallion back in July. Read previous post here.

Lanez whose real name is Daystar Peterson was charged with a felony count of assault with a semiautomatic firearm, a felony count of carrying a loaded, unregistered firearm in a vehicle, and for personal use of a firearm in a statement released by the Los Angeles County District Attorney’s Office on Thursday.

His arraignment is scheduled for Oct. 13 at the Foltz Criminal Justice Center in Downtown Los Angeles. If convicted as charged, the rapper could face a possible maximum sentence of 22 years and eight months in state prison.

On Friday, the Canadian rapper responded to the charges in a tweet, saying via emoji that “time will tell.”

“The truth will come to the light … I have all faith in God to show that,” he continued. “Love to all my fans and people that have stayed true to me & know my heart … a charge is not a conviction. If you have supported me or meg thru this , I genuinely appreciate u.”

His father, Sonstar Peterson later took to Instagram to pen a message of support to the rapper.

He wrote: My son @torylanez I say to you this day. Stand still, and see the salvation of the Lord, which He will show to you today; for the Egyptians whom you have seen today, you shall see them again no more.You will not have to fight this battle. Take up your positions; stand firm and see the deliverance the LORD will give you Daystar.Do not be afraid; do not be discouraged. Go out and face them tomorrow, and the LORD will be with you.” 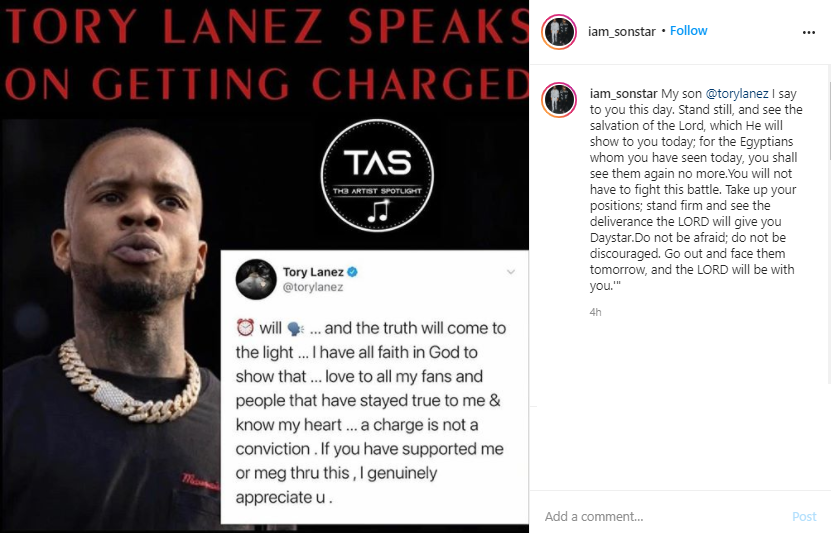 Got a story? If you’ve got a celebrity story, video or pictures get in touch with the Dailynaijamode.com entertainment team by emailing us celebritygists@dailynaijamode.com - we’d love to hear from you.
Facebook
Twitter
Pinterest
WhatsApp
Previous articlePhoto of Police Officer Who Shot Woman Mouth At Opebi Surface Online
Next articleCharming African Dresses For Lovely And Simple Ladies