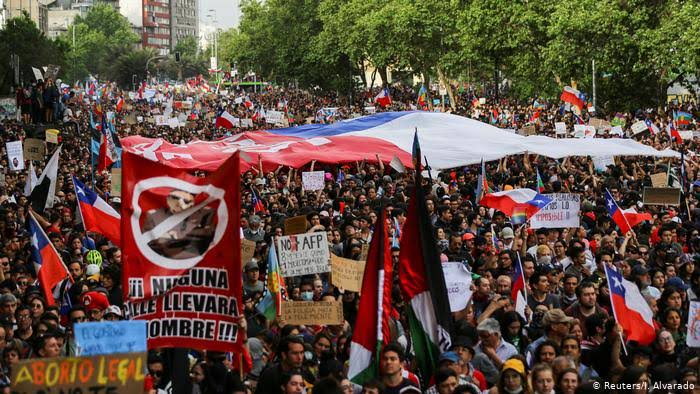 Protesters clashed with police who had set up barricades to protect private Pedro de Valdivia University, and shortly thereafter the wooden roof of its 100-year-old administration building began to burn, witnesses said.

Fire crews had trouble reaching the blaze because of all the demonstrators.
Nearby, hooded protesters looted the church of La Asuncion, which was built in 1876, dragging furniture outside and setting it alight.

Tens of thousands of people had filed earlier into Plaza Italia, which has become ground zero in this spasm of grassroots fury over low wages, high costs for education and health care and a socio-economic system they see as favoring the wealthy. The unrest has left 20 people dead.

In the third such huge march, they renamed the square “Dignity Plaza.”

As night fell, protesters blocked roads near an upscale shopping mall that is considered a symbol of modern, prosperous Chile and erected flaming barricades. They chanted and shouted slogans against conservative President Sebastian Pinera.

The mall has been closed for nearly two weeks because of the unrest.

As they passed by the presidential palace, protesters chanted slogans against Pinera and demanded that he step down. They also insulted police guarding the building.

“I came to crush these myths that these are violent protests,” said Cristian, a 27-year-old student.

On Thursday Pinera announced measures to tighten public order in the wake of the anti-government protests.

Unrest that began on October 18 with protests against a rise in rush hour metro fares and has descended into burning, looting and daily clashes between protesters and police in a broader outcry against the status quo in what is generally considered one of South America’s most stable countries.

Police said Thursday nearly 10,000 people had been arrested during the unrest, most being released shortly afterwards.

The president last week reshuffled his government and announced a series of measures aimed at placating the protesters, including a law guaranteeing a minimum monthly wage of about $465.

But protesters have continued demanding that the right-wing billionaire step down.

Marching along a road called the Alameda, Torres teared up as he said, “It fills me with joy to see these young people rising up.

“How could people not realize before that we were being condemned to poverty?”§