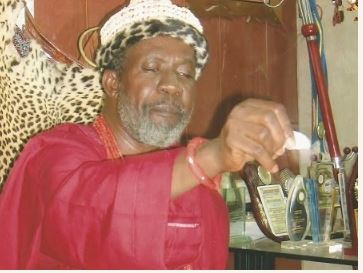 Ahead of the Kogi State governorship election, slated for Saturday, 16th November 2019, an Anambra based Spiritualist, Dr Ramas Azuzu, the Founder and Spiritual Leader of Liberation Temple of the Absolute God, has prophecied that the candidate of the All Progressives Congress (APC), Alhaji Yahaya Bello and his running mate, Mr Onoja, would be declared winner of the contest without hindrance.

Asuzu, gave the prophecy while speaking with newsmen at his Temple home in NRI, Anaocha Local Government Area of Anambra state on Friday.

According to him, “since this election build-up, I have been asking questions at the spiritual realm, I consulted the spirits, the ancestors and the oracles; what they all told me is that Governor Bello, would be reelected to complete his second term in office.

“Though, before the spiritual consultation, I had a dream where the father of Governor Bello, was raining blessings before a large congregation, saying God Almighty has accepted and endorsed his son to consolidate on the ongoing economic achievement of President Mohammadu Buhari-led Federal Government,

In 2015, I prophesied Buhari victory against Goodluck Jonathan, it worked, In 2019 Presidential election, I also predicted the second term victory of President Buhari, it worked.

Again, I prophesied the emergence of Governor Fayemi of Ekiti and his Osun State counterpart, Mr Oyetola, respectively in 2018, where they both defeated their closest rivals, it also worked. So Governor Yahaya Bello of the APC will also defeat his arch-rival, Engr Musa Wada of the People Democratic Party PDP, in a landslide,” he said.

He, however, warned that there might be little upheaval over the outcome of the election but called on other Nigeria Clergies to pray hard against post-election violence in Kogi State.

On the achievement of president Buhari, Asuzu, who is also called Ezeji ofor Ndi Igbo (custodian of Igbo culture), described the Buhari-led administration as the best since the returned of Democracy in Nigeria, in 1999.

Asuzu said even if I am a Peoples Democratic Party (PDP) sympathiser, it would not becloud me of my spiritual vision.

“As a person, I remain a strong member in Anambra PDP, I support their programmes. but that will not make me change what I see as a prophet, I am the crowned custodian of Igbo culture and worshiper of the Absolute God, PDP may be good for the electorates, but they will not win in Kogi state on Saturday,” he maintains.

He urged the Chairman of the Independent National Electoral Commission INEC, Prof. Mamood Yakubu, to caution his staff not to allow politicians to seduce them with money for the sake of credibility.

In the case of Bayelsa state election, the spiritualist said he is yet to receive revelation from God