A lady identified as Nana Ama is trending on Twitter after she broke up with a KNUST student who is having it hard to deal with the situation.

In a series of videos, audios and screenshots making rounds on social media, the broken-hearted guy is being trolled for allowing himself to be ditched by Nana Ama in the first place.

the majority of social media users have labelled the guy as a ‘soft guy’ who is crying over a lady.

The young guy identified as Samuel Aboagye(Sammy) could be heard in one the audios begging for Nana Ama not to break up with him as he kept begging for forgiveness for cheating on her.

Another episode of “Love no catch you before?”

629 people are talking about this

618 people are talking about this

In another video, Sammy is seen on his phone still trying his luck to get Nana Ama to accept his apology.

On behalf of all Continentals we disassociate ourselves from him..he cant be a Continental and act like this! Nana Ama too we dey go search m she for take m back!! 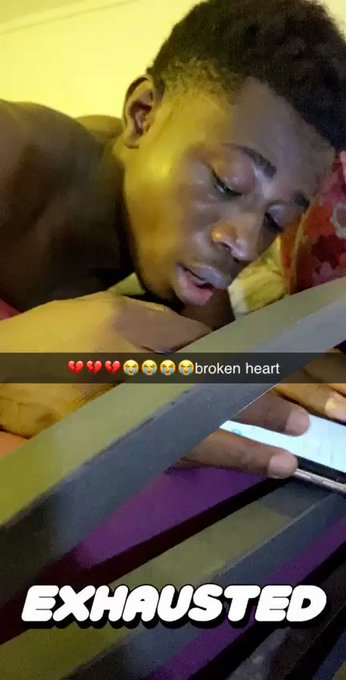 433 people are talking about this

This is the background of the Nana Ama story:

The whole ‘wahala’ started when Sammy made his sidechick ‘BJ’ his joystick and his girlfriend Nana Ama got the gist.

When she demanded answers as to what happened between Sammy and the side chick, he said he did not chop her but she [the side chick] just pulled his joystick out and did her own thing with it.

Check out Screenshots of their chat below: