I use PiggyVest to save & invest securely. Sign up with my link and get ₦1,000.00 to start your own savings journey - https://www.piggyvest.com/?newref=1&ref=9e430199a40620
For the first time in weeks, South Africans are allowed to buy alcohol and cigarettes as the government relaxes lockdown restrictions introduced to curb the spread of coronavirus.Long queues of eager customers formed outside shops just hours after the new rules came into effect.
The government said it had eased the lockdown because South Africa was seeing a decline in coronavirus cases.It has It has recorded the highest number of cases and deaths in Africa.‘My blackouts were a misguided badge of honour’Tobacco and alcohol firms opposed the ban on the sale of liquor and cigarettes, saying it was having a negative impact on business.Medical experts supported the ban, saying it was vital that people led healthy lives while helping to ease the pressure on health services.Some experts say smokers increase the risk of spreading the virus because they project droplets – and potentially Covid-19 if infected – when they exhale smoke.This is the second time this year that South Africa has lifted its ban on alcohol – after briefly doing the same in July.Under the new “level two” guidance, people are also allowed to travel between provinces, while visits to family and friends are permitted in small groups of up to 10 people.Parks and beaches have also reopened and sporting events can go ahead without spectators.Alcohol sales are only permitted between 09:00 and 17:00 on Mondays to Thursdays, and South Africans are subject to a nightly curfew from 22:00 to 04:00Many South Africans have told local media of their relief – including one overjoyed woman who kissed her pack of cigarettes, according to TimesLive.On Twitter, Petri van Zyl joked that fumes from “happy smokers” were visible from space: 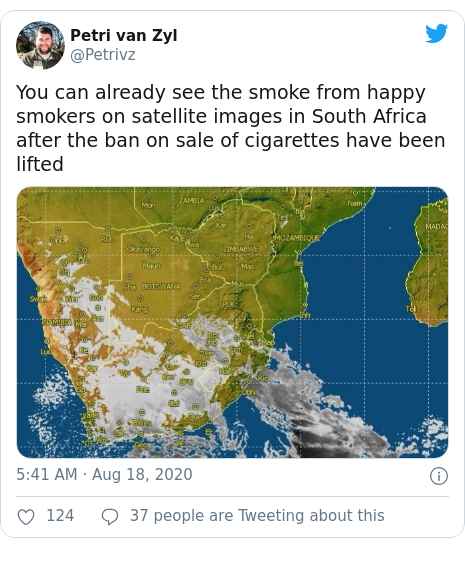