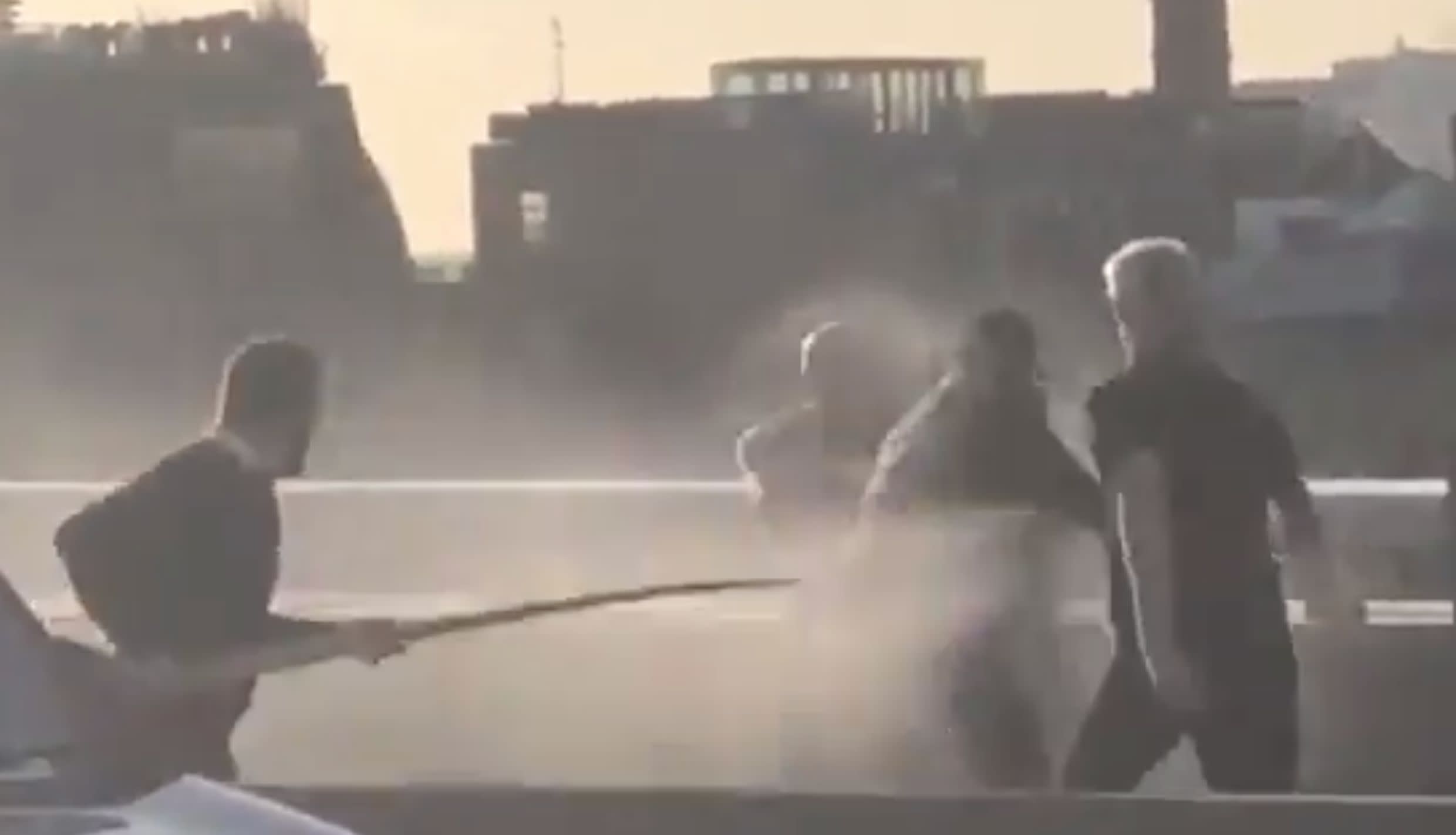 A man armed only with a 5ft narwhal tusk has been commended as a hero after footage of him confronting the London Bridge attacker was shared online.

A video from the incident appears to show three men – including one armed with a huge narwhal tusk and another with a fire extinguisher – pursuing the knifeman out onto London Bridge and tackling him to the ground.

The attacker was identified in the early hours of Saturday morning as Usman Khan, 28, from Staffordshire – a convicted terrorist with known links to extremist groups.

Two people were killed during the incident, which is believed to have started in Fishmonger’s Hall, in which an event held by the University of Cambridge’s Criminology department was being held. Three other victims remain in hospital, where they are being treated for their injuries.

Three members of the public armed with a fire extinguisher and a Narwhal tusk take the attacher down. Heroes. pic.twitter.com/8yGBPaGtbL

Students, academics, and alumni were in attendance, as well as offenders who had been released from prison and were undertaking a programme of rehabilitation – among them is believed to have been Khan, who was imprisoned in 2012 for his part in a plot to bomb the London Stock Exchange.

The Times identified the man with the tusk only as Luckasz, a chef from Poland who is believed to have been working in the hall at the time of the attack.

A photograph allegedly taken in the hall prior to the attack appears to show the enormous ornamental tooth hanging beside a second specimen beside a door. The narwhal’s tusk gives the animal, a type of whale, its nickname “the unicorn of the sea”.

Two Londoners, one armed with a fire extinguisher and the other with a narwhal tusk, take on a knife-wielding terrorist on London Bridge. pic.twitter.com/QtJrgei5do

The men have been praised for their quick-thinking actions in the midst of the attack, alongside a number of other members of the public who were seen confronting Khan – who was wearing a fake suicide vest – and even managing to take at least one knife out of his hand.

The Daily Mail reported that one of the men present during the attack was convicted murderer James Ford, who is believed to have been on day release on Friday.

In 2004 he was given a life sentence for murdering Amanda Champion,  21-year-old from Ashford in Kent with learning difficulties.

It is not clear where he was as the scene unfolded, however Champion’s aunt Angela Cox told the Daily Mail that he was “not a hero”, and described him as a “cold-blooded murderer”. The family were reportedly unaware that Ford was on day release on Friday.

Emergency services were called to London Bridge shortly before 2pm, fatally shooting Khan before evacuating the area around the site of the incident, including Borough Market.

London Bridge station was closed and a wide cordon put in place as officers reportedly swept the area for explosive devices.

dailynaijamode - February 24, 2021 0
Meta Kekana is a beautiful South African influencer, who is gaining popularity through her consistency in sharing beautiful pictures on Instagram. Many of her followers compare her to the likes of Nicki Minaj and...
Read more