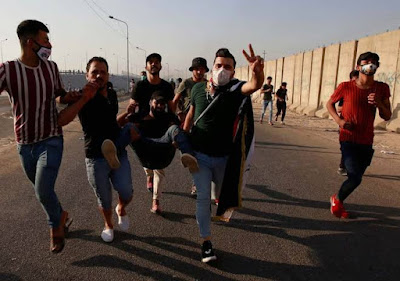 Internet access in the capital Baghdad and much of Iraq has been cut off, internet blockage observatory NetBlocks said late on Monday as the country experiences a wave of anti-government protests.

“At the time of writing, national connectivity has fallen below 19% of normal levels sending tens of millions of users offline across Baghdad, also impacting Basra, Karbala and other population centers. The new disruption is believed to be the most severe observed in Iraq to date,” NetBlocks said in a statement.

Iraqi authorities have previously blocked off internet access in the face of protests.

You will pay for the hotel, he will have s3x with you and give you 2k – Nkechi Blessing Sunday tells those who want...

dailynaijamode - February 24, 2021 0
Meta Kekana is a beautiful South African influencer, who is gaining popularity through her consistency in sharing beautiful pictures on Instagram. Many of her followers compare her to the likes of Nicki Minaj and...
Read more
https://wlbet9ja.adsrv.eacdn.com/C.ashx?btag=a_152489b_915c_&affid=9196&siteid=152489&adid=915&c=