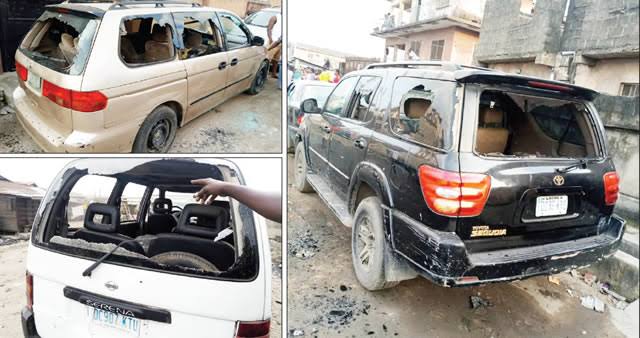 There was drama in the Itire-Ikate area of Surulere, Lagos State, on Friday, November 8, 2019, as hoodlums invaded some streets and vandalised over 200 vehicles belonging to residents.

According to the residents, the vandalized vehicles were parked on Bashorun, Shobande, Ogunsami, Ogunmuyiwa, Oredola, Lagos, Oshiga, Salami Bashorun and adjoining streets under the Oredola Community Development Association.

DAilynaijamode.com learned that there was a crisis was between hoodlums from Shobande and Wosilat streets, as they stormed the area around 11.30pm on Friday and allegedly used cutlasses and hammers to smash the windscreens of vehicles parked on streets in the area.

It was learnt that the hoodlums, who wore masks, also took advantage of the tension in the area to rob unsuspecting members of the public of their valuables during the operation.

A mechanic in the area, Amuda Olisa, said the crisis was between two factions of hoodlums in the community, adding that two vehicles belonging to his customers were vandalised.

He stated, “On Friday, around 11.30pm, the hoodlums invaded the area and started breaking the windscreens of vehicles that were parked on the streets. They carried out the operation till 1am, but when the police came, they had already vandalised a lot of vehicles. The boys are from Shobande and Wosilat streets, but the police did not arrest them.

“The fight started on Thursday, but the police were able to chase the hoodlums away. On Friday night, they reinforced and started vandalising vehicles. We were hearing the sound of vehicles being smashed with cutlasses and hammers, and they also robbed people.

“Two vehicles belonging to my customers were vandalised. I will have to foot the bill of repairing the vehicles. The hoodlums even came back on Saturday, but we the residents had to defend ourselves and chased them away, because they had already done a lot of damage.”

A resident of the area, Yusuf Abubakar, said the hoodlums smashed the windscreens of over 200 vehicles during the invasion, adding that the Chairman, Itire-Ikate Local Council Development Area, Ahmed Apatira, had visited the community to assess the situation.

Abubakar stated, “The windscreens of vehicles that they destroyed were over 200. We were just hearing sound around midnight and residents, who peeped through their windows, estimated that the hoodlums were over 30 and were armed with cutlasses, torch lights and other weapons, with which they vandalised the vehicles.

“When the Chairman of the LCDA and his entourage visited the area, they only observed what happened and left. A lot of residents have taken their vehicles away for repairs, while some are still parked at the spot where they were vandalised.”

Another resident, Bankole Ajirotutu, said up to 40 vehicles parked on Lagos Street were vandalised, adding that his car was among them.

The Chairman, Oredola CDA, Yinka Oniare, said the hoodlums covered their faces with masks when perpetrating the crime, adding that the business of mechanics in the area had been affected.

He stated, “The hoodlums were young boys armed with cutlasses, hammers and other weapons used in destroying over 200 vehicles parked on the roads. Most of the people, who saw them, said the hoodlums were masked. All the vehicles parked on Shobande, Ogunsami, Ogunmuyiwa, Oredola, Lagos, Oshiga and Salami Bashorun streets, including those belonging to customers of mechanics, were badly damaged.

The state Police Public Relations Officer, Bala Elkana, however, said only 12 vehicles were vandalised, adding that gangs from a neighbouring community were responsible for the attack.

“It was not a clash; the gangs came from a neighbouring community that is having issues with gangs in the area. The gangs came through the lagoon around 4am and vandalised 12 vehicles parked on the streets and ran back. The police responded and arrested a suspect. Investigation is ongoing,” Elkana said.

The residents faulted the position of the police, saying they only visited one of the affected streets.

Reason I made a movie on Prostitution- Sharon Okpamen

dailynaijamode - September 20, 2020 0
Fast rising Nollywood actress and producer, Sharon Okpamen has justified her reason for doing a movie about prostitution.According to the script interpreter, it’s the oldest profession and business in the world. Sharon made this shocking...
Read more

I Wish I Had Friends That Can Be There Anytime I Need Them –...

dailynaijamode - September 20, 2020 0
Billionaire wife Regina Daniels has lamented over how her friends exploit their friendship saying she wishes to have a friend who will always be there for her. According to her, she wishes to have friends who...
Read more
https://wlbet9ja.adsrv.eacdn.com/C.ashx?btag=a_152489b_915c_&affid=9196&siteid=152489&adid=915&c=

#EDODECIDES2020! Davido Calls Governor Obaseki To Congratulate Him Ahead Of INEC...

Reason I made a movie on Prostitution- Sharon Okpamen