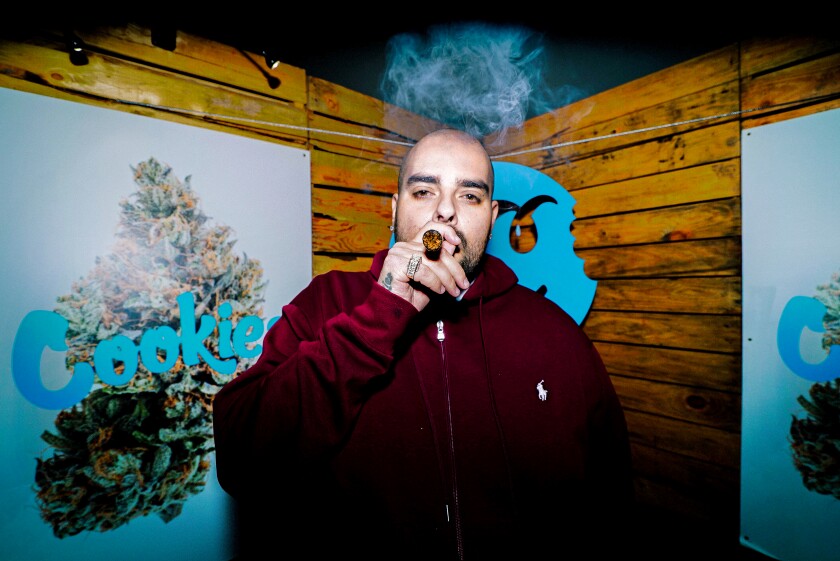 Gilbert Milam Jr. had a very specific desire: He wanted to share photos of weed with his 1.2 million Instagram followers.

But Instagram was persnickety, continually taking the photos down or suspending his account. So Milam, a San Francisco rapper and marijuana business owner better known by the stage name Berner, came up with a simple solution: he would create his own, unfiltered version of the Facebook-owned social photo-sharing app.

He hired a few developers and released Social Club to the public in mid-July. What happened next was predictable to anyone who studies digital behavior. Like nearly every online platform created with the goal of offering a completely censorship-free alternative in the last decade, the app rapidly devolved into a cesspool of horrific violence, illicit drugs, racism and child pornography.

Responding to the lawlessness, Apple pulled Social Club from its App Store Tuesday night. As of Wednesday afternoon, it was still available on Google Play, the app store for Android devices.

In a phone interview Wednesday, its creator didn’t sound particularly sure it deserved a reprieve, at least not without major changes.

“At the end of the day I never thought that [stuff] would hit so hard on what I created,” Berner said. “I’m all about freedom of speech and if a girl wanted to show off her body a little bit or something, that was cool, but the kind of (stuff) people were putting up — they didn’t know what they were doing.”

He hired a small team to develop Social Club at the end of 2018. His pitch, over and over again, was that you no longer had to worry about having your Instagram deleted or suspended based on what you post. Berner was drawing on his own experience: His Instagram account has been suspended multiple times for violating Instagram’s prohibition against using the site to advertise or sell weed.

“The worst feeling is to build up a cult following for your brand and have it taken away from you,” Berner said.

Berner invited other weed businesses to create their own accounts so they could advertise without fear of reprisal by Instagram moderators.

“Legendary move maker ! Created this app for people that want to share weed pics without being hated on,” read the bio on his Social Club account.

He said he didn’t notice any problems until the number of users began to climb rapidly in early October, he said, spiking from 170,000 to nearly half a million practically overnight.

Sunday night Berner posted a screenshot on Twitter showing Social Club (with the tagline, “your zero-censorship community”) had climbed to spot number four on the top charts list of free apps, just below TikTok, YouTube and Instagram.

But the app’s “discover page,” which aggregates new posts for users to explore other content from accounts they don’t follow (in a manner similar to Instagram’s “Explore” page) — was overrun by dark, malicious content and unimaginable gore.

At first Berner thought the new influx of users was a result of people being afraid of police surveillance on other popular social media apps. Now, he and his developer think it was a coordinated attack. (Berner did not offer any proof for that theory and acknowledged he’s “not a technologist”)

“There was all kind of weird nudes and memes and [stuff] that was not right. It needs to be censored. We got image recognition being installed right now to the app,” he said in the video, adding that photos of pills proliferating on the app were also a problem.

Berner is far from the first entrepreneur to attempt to replicate a popular social media platform, sans content moderation. Several such efforts have emerged from the so-called alt-right, whose adherents believe they’re being stifled by mainstream political correctness. Typically, they’ve struggled to rein in the results.

As Reddit began to ramp up efforts to ban communities that were hateful or discriminatory — for example, subreddits focused on attacking overweight people, transgender people, and black people — a Reddit clone called Voat was founded in 2014 in response. As users flocked to the alternative site in protest, it quickly became a hotbed of hateful content.

Earlier this year, Voat founder Justin Chastain asked his users to “chill” on posting death threats because the platform had been approached by an unnamed federal agency, Vice reported. Chastain added that he didn’t want to restrict free speech, but that Voat would cooperate with law enforcement and remove posts if necessary.

Gab, a social media networking site created in 2016 as the “free speech” alternative to Twitter, became popular among neo-Nazis. Right-wing conspiracy theories, anti-Semitism and anti-black content proliferate on the platform.

Multiple mass shootings have been linked to activity on 8chan, a message board created in 2013 as a less rules-bound alternative to the lightly policed 4chan. Cloudflare, a service that protects websites from cyberattacks, stopped providing services to 8chan after the El Paso mass shooting earlier this year; the shooter had posted a racist manifesto there.

Social media giants still struggle to manage hate speech on their platforms, with executives from Facebook, YouTube and Twitter getting called before Congress repeatedly to defend their policies. Under fire, they have begun to ban the accounts of controversial figures and update their policies.

Despite all this playing out in public, when it happened to Social Club, it caught Berner by surprise.

“The community coming and flooding me with a bunch of crazy content, I wasn’t ready for that. But at the end of the day being an owner of multiple businesses you have to be ready for anything when it happens,” he said.

Berner said he had invested too much money in developing the app to consider shutting it down, although he declined to say how much. He’s prepared to invest still more to fix it. Currently, the app is run by four people, including himself. He plans to hire people and implement software tools to help moderate content.

Whatever Social Club becomes, one thing it won’t be is “censorship-free.” Belatedly, Berner has learned why that’s a bad idea.

“I think that was a poor choice of us to use as far as wording. What we meant to say was, without trying to say it too loudly on the app store, ‘This is an app for weed,” he said. “I think maybe I just need to be a little more vocal about that.”