WITHIN NIGERIA learnt that other suspects fled at the heat of the crossfire that ensued between them and operatives of Operation Delta Safe (OPDS) of the Nigerian Army stationed at Oviere army post.

It was further learnt that soldiers of OPDS got a distress call from a resident of the community that the robbery suspects were in operation.

Recall that the soldiers started Operation Crocodile Smile 6 on November 20 in the state to safeguard residents ahead of the Yuletide responded swiftly.

It was further gathered that the suspected robbers

on sighting the soldiers, opened fire but could not sustain the soldier’s superior firepower.” alt=”” aria-hidden=”true” /> 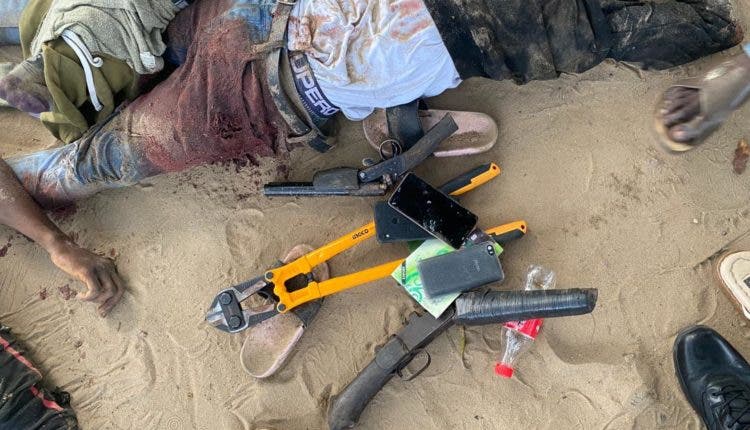 Sanni said the soldiers, with the support of local vigilante at Oviore, responded to the distress call on November 20 at about 10:04 p.m from residents of the community.

Items recovered from the scene, according to the army officer, included two locally-made guns, one tricycle, three mobile phones and one iron cutter now in the custody of the army

Got a story? If you’ve got a celebrity story, video or pictures get in touch with the Dailynaijamode.com entertainment team by emailing us celebritygists@dailynaijamode.com - we’d love to hear from you.
Facebook
Twitter
Pinterest
WhatsApp
Previous articleWrestling legend, The Undertaker officially Confirms WWE Retirement after 30 year career (Photos/Video)
Next articleJUST IN: Former Bauchi Health Commissioner Zuwaira Hassan Dies In Fatal Car Crash (Photo)

Friends are mourning Eddyth Obianuju Odidika, an actress and model who has died months after going online to solicit funds to treat an ailment.   According...
Read more
Entertainment News

A lady has shared a video of her filming herself as she pushed up her gown to show off her thighs as a Pastor...
Read more