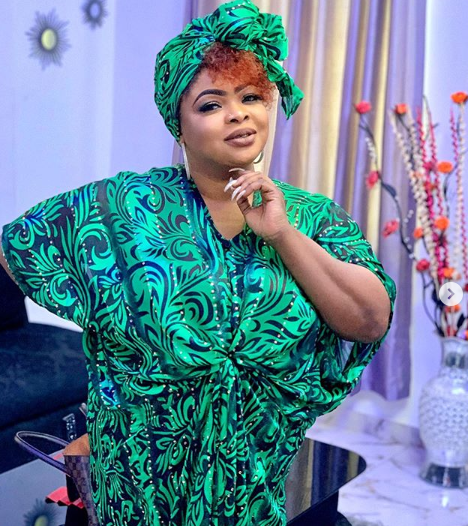 Dayo Amusa has fired back at trolls after being dragged for publicly admitting that she enjoys having sex.

The heated exchange came after the Nollywood actress shared her thoughts about sex and the stereotype attached to women having sex with different partners.

The ish am about to raise here now might probably offend some of you, even if it result to an unfollown, Iyen gan tun nice. Proceed with caution

Why the actual fuck does a woman that enjoys having sexual relationships with a partner or partners automatically make people jump to conclusion that the woman doesn’t respect herself? Why does a woman have to justify herself? I don’t give a fuck if you sleep with 200 people or you’ve only ever been with 1 or none. I don’t a fuck if you’re sleeping with two, three or twenty partners. I don’t give a fuck if  you have sex on the first date or wait until the 30th date. Want to know why I do’t give a fuck? Because it’s none of fucking business.

You know your body, and at the end of the day it’s your body therefor you make the rules. Why are women being shamed for having sexual relationships? The sad part is majority of it is women shaming other women. SUPPORT EACH OTHER FOR FUCK SAKES. SEX IS A NATURAL HUMAN INTERACTION. Fuck who you want, when you want, where you want. You don’t owe an explanation to anybody. And you surely are not ‘disrepectin yourself’ because you enjoy having sex. Be transparent,  and educate yourself before expressing such stupidity. But make sure you are playing safe o. Make safe choices 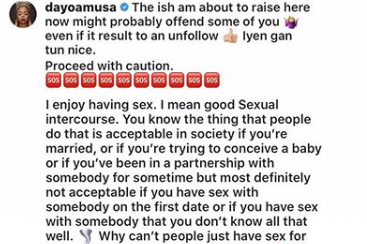 The actress was however forced to react to certain comments which attacked her career and accused her of not being a good role model and representative of the Yoruba culture.