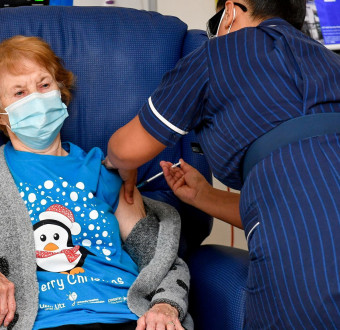 Margaret Keenan, 91, the World’s first patient to get Covid vaccine has received her second dose of the Pfizer coronavirus vaccine.

She had her follow-up injection today and is now at home and recovering well, the University Hospitals Coventry and Warwickshire NHS Trust said.

The grandmother made headlines when she became the first person in the world to get the jab on December 8, and NHS England said that she would have a ‘booster jab’ 21 days later ‘to ensure she has the best chance of being protected against the virus’.

At the time, Margaret who hails from Enniskillen in Northern Ireland, but has lived in Coventry for more than 60 years said it was ‘a privilege’ to get the first dose, and said it was ‘the best early birthday present I could wish for’ after being ‘on my own’ for most of 2020.

She added: ‘I can’t thank May and the NHS staff enough who have looked after me tremendously, and my advice to anyone offered the vaccine is to take it – if I can have it at 90 then you can have it too.’

The former jewellery shop assistant, who only retired four years ago, turns 91 next week. She has a daughter, a son and four grandchildren.

How To Get Affordable Car Insurance In Massachusetts

Almost every driver in Massachusetts is looking for affordable car insurance. And why not? You may have to purchase car insurance to drive a...
Read more
World

President of the United States, Donald Trump, has accepted a formal transition should begin for President-elect, Joe Biden, to take office, a report by...
Read more
Headlines

The United States, US, President, Donald Trump, has warned the Democratic presidential candidate, Joe Biden against making a “wrongful claim” to the country’s seat...
Read more