Kamala Harris has reacted after making history as the first woman and black person to be named vice president-elect following her election victory with President-elect Joe Biden.

Joe Biden became the 46th President of the United States of America by clinching Pennsylvania and its 20 electoral votes on Saturday  November 7, ending Donald Trump’s hopes of re-election. The win in Pennsylvania took Biden’s electoral college vote to 284, surpassing the 270 needed to win the White House.

After the election news was made, Harris tweeted a statement and video. “This election is about so much more than Joe Biden or me,” she wrote in her caption. “It’s about the soul of America and our willingness to fight for it. We have a lot of work ahead of us. Let’s get started.”

The 56-year-old politician has also changed her Twitter bio to “Vice President-Elect of the United States.” 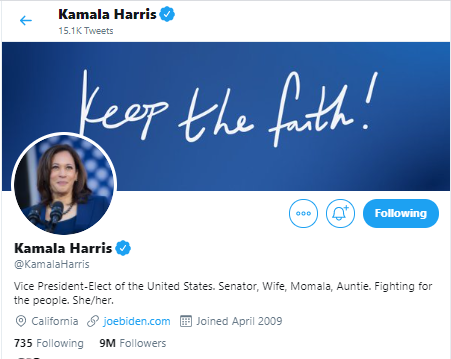 Harris also called Biden to congratulate him on winning US presidential election. Watch the video below..

https://twitter.com/KamalaHarris/status/1325119592130252801?ref_src=twsrc%5Etfw%7Ctwcamp%5Etweetembed%7Ctwterm%5E1325119592130252801%7Ctwgr%5Eshare_3&ref_url=https%3A%2F%2Fwww.lindaikejisblog.com%2F2020%2F11%2Fkamala-harris-reacts-after-making-history-as-the-first-woman-and-black-person-to-be-named-vice-president-elect-calls-joe-biden-to-congratulate-him-videos.html
Got a story? If you’ve got a celebrity story, video or pictures get in touch with the Dailynaijamode.com entertainment team by emailing us celebritygists@dailynaijamode.com - we’d love to hear from you.
Facebook
Twitter
Pinterest
WhatsApp
Previous articleBeautiful photo of Keke driver’s wife and their adorable quintuplets
Next articlePresident Trump tops loser column for search on Twitter