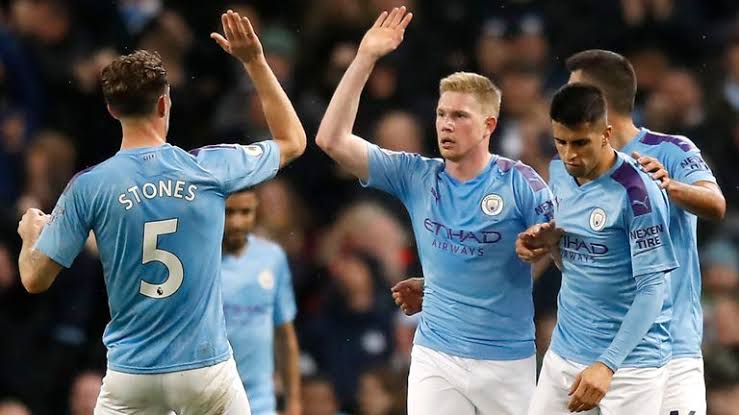 Manchester City’s Premier League title hopes faltered once more as the champions twice blew a lead to draw 2-2 at Newcastle on Saturday.

Pep Guardiola’s men were frustrated for long spells after Jetro Willems quickly cancelled out Raheem Sterling’s first half opener, but seemed to have found the moment of magic they needed thanks to Kevin De Bruyne’s sensational strike eight minutes from time.

City have now dropped points in five of their 14 league games this season and could end the day 11 points behind leaders Liverpool.

Guardiola was without Sergio Aguero who has been ruled out for a couple of weeks by a thigh muscle injury and City missed his predatory instincts as they failed to make nearly 80 per cent possession count.

Sterling has usurped Aguero so far this season as City’s major source of goals and was clinical 22 minutes in after a lovely backheel from David Silva set the England international up for his 15th goal of the season.

However, the lead lasted just three minutes as the normally goal-shy Magpies produced their own moment of quality when Miguel Almiron teed up Willems to slot past Ederson into the far corner.

When City lost on their last visit to St James’ Park back in January the title seemed lost, only for a 14-game winning streak to end the campaign to pip Liverpool to the post.

The Reds’ relentless form at the top of the table meant City started the day nine points behind and with precious little margin for error even before November is out.

But the sharpness and accuracy of passing that has characterised City’s two title triumphs under Guardiola was lacking as the visitors’ struggled to unlock the mass ranks of the Newcastle defence.

City finally began to work Martin Dubravka in the Newcastle goal in the final quarter as De Bruyne’s shot from a narrow angle was turned away before Gabriel Jesus had a huge chance to make his mark in Aguero’s absence.

The Brazilian was played clean through on goal by Silva but shot straight at Dubravka before De Bruyne’s follow-up effort was blocked.

Bernardo Silva and Phil Foden were called upon from the bench to make and impact in the final 20 minutes and with his first touch Bernardo dragged wide another glorious chance on his normally trusty left foot.

De Bruyne was the one constant threat for City and looked to have won the game when he chested down a looping clearance before smashing the ball in off the underside of the bar.

Newcastle had barely mustered a single attack in the second half, but after Fernandinho conceded a needless foul and was lucky to avoid seeing a second yellow card, Christian Atsu picked out Shelvey unmarked on the edge of the box to find the bottom corner.

City still had one more chance to take all three points in stoppage time when De Bruyne picked out Sterling, but his shot lacked the power to beat Dubravka and with that opportunity may have gone their chances of a third title in a row.