Some members of the Abubakar Shekau-led faction of Boko Haram in Niger state have been spotted in a viral video observing the Eid Al-Adha prayer in an undisclosed bushy area.

Though when the video was made is still unclear, the Eid Al-Adha was however celebrated by Muslim faithful across the globe on July 31.

In the viral video, three of the supposed insurgents sent Eid greetings in Hausa, English, and Fulfulde. One the men was heard saying;

“It is we the Jamahatu Ali Sunna li Dawatul Jihad in the location of Niger State. We want to send our Sallah salutation, first of all to our imam, Abu Muhammad Ibn Muhammad Abubakar Shekau.”

Bulama Bukarti, an analyst and human rights lawyer who shared the video on Twitter, expressed concern that the insurgents may have killed some military officers and taken possession of their uniforms.

The Shekau-led faction of BH has released its first video exclusively featuring members claiming to be from Niger State. It shows about one hundred persons praying Eid in the heart of a bush before showing three fighters sending Eid greetings in Hausa, English and Fulfulde.

It’s interesting that two of the fighters were respectively wearing Nigerian military & police uniforms. This indicates that they might’ve recently killed security forces and got their uniforms. This is because in their past video, the only speaker from Niger was in mufti.

This video, if genuine, is further evidence that BH has expanded to the northcentral. The dense forest there is a perfect haven for terrorists and if the group is able to consolidate its presence in Niger, it can easily target Abuja as well as to other states like Kwara and Kogi.

I won’t get tired of urging the FG and the Niger State Govt to take this threat seriously. We shouldn’t wait until the situation gets out of control before we start running helter-skelter. We better nip this challenge from the bud before it grows too gigantic to be uprooted. 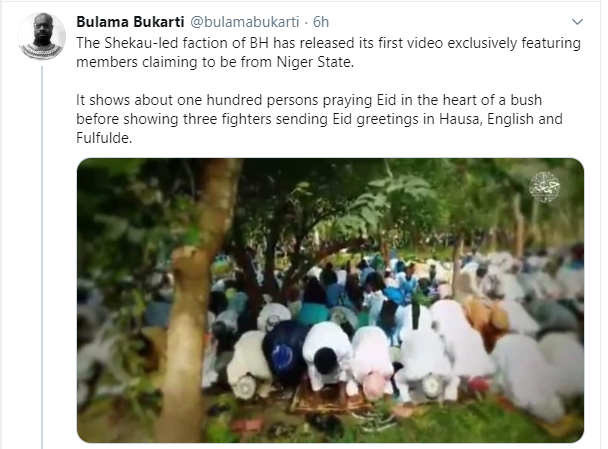 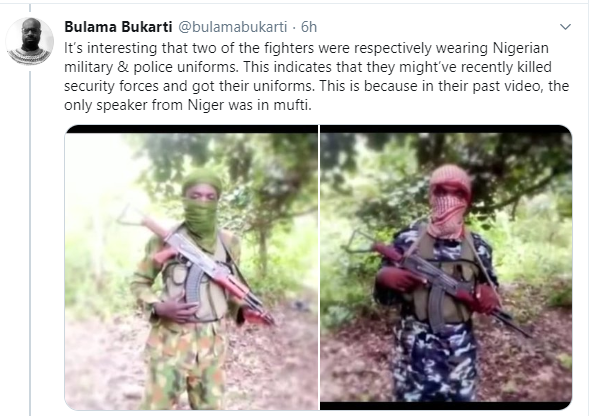