The candidate of the All Progressives Congress in Bayelsa State, Chief David Lyon, has emerged the winner of the governorship election held on Saturday.

Lyon’s victory marks the first time the PDP would lose a governorship election in the state since the nation returned to democracy in 1999.

The Chief Returning Officer, Prof. Faraday Orumwense, had after he released the result of the Ekeremor Local Government Area, which was the last being expected by INEC on Monday night, promised that the final result would be made public before 1am on Monday.

Orumwense made good his promise as he announced that Lyon polled 352,552 votes to defeat Diri, who polled 143,172 votes some minutes after 1am.

Lyon was declared winner in six out of the eight local governments announced by the Independent National Electoral Commission at the Prof. Mahmood Yakubu Media Centre in the state commission’s headquarters in Yenagoa, the state capital.

The result from Nembe LGA, Bayelsa East showed that the APC garnered 83,041 votes while the PDP polled 874 votes. 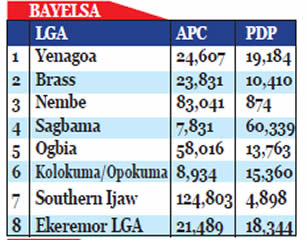 In Southern Ijaw Local Government, the APC candidate polled 124,803 votes while his rival got 4,898 votes.