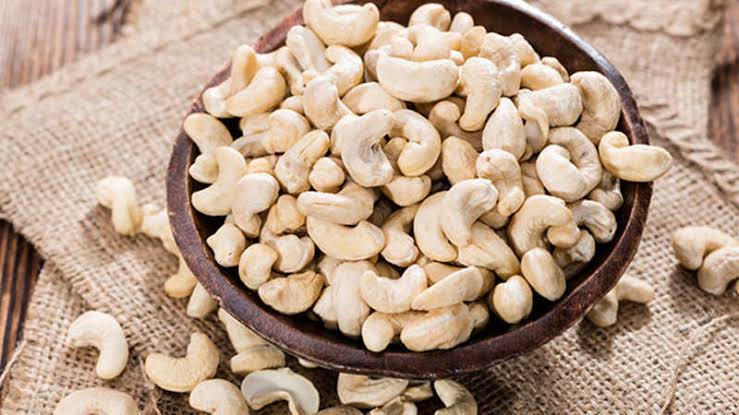 Cashew an important nut is fast booming in the Nigerian market as exporters are exporting a larger percentage of the crop to Asia, Europe and the United States of America.

Nigeria is a natural habitat for cashew and among the world’s producers and suppliers of the crop.

The country is currently rated as the fourth-largest producer of cashew nuts in Africa and sixth in the world, with 160,000 metric per annum and is expected to reach 500,000 metric tons by 2020.

Besides cocoa, cashew is another major cash crop in Nigeria that has huge export potentials.

It has become a top-notch cash crop in Nigeria and is eaten and also serves as industrial raw materials in firms producing chemicals, paints, varnishes, insecticides and fungicides, electrical conductress, and several types of oil.

Cashew exporters in Nigeria made $300 million in 2016 and $350 million, according to Tola Faseru, former president, National Cashew Association of Nigeria (NCAN).

Two good things about cashew are that its return on investment is as high as 55 percent and its payback time is just 12 months, say experts.

But despite the promises, the cultivation of cashew holds, the country is yet to fully harness the potential of the crop owing to several factors.

The country still exports about 95 percent of its cashew nuts unprocessed despite the huge investment opportunity in value addition.

Similarly, inadequate storage facility for cashew fruits in the country has led to an estimated loss of eight million tons of the fresh fruits yearly.

As a result, some agro-allied firms are investing across the country’s cashew value chain to change this narrative. Among them is Hastom Farms.

Hastom Farms is currently investing massively in the cultivation of the crop and with plans to start adding value.

The farm has cultivated cashew trees on about 550 acres in Ogbomosho, Oyo state and making investments across the value chain.

“Cashew farming is one of the most profitable long-term agricultural investments,” Debo Thomas, chief executive officer, Hastom Farms said during a farm tour.

“Cultivation of the crop allows you to make other short term profits through intercropping with other crops,” Thomas added.

He noted that the country is yet to fully harness the potential in the cultivation of the crop because Nigerians do not want to tie down their investments for a long period.

He added that with the spacing style employed by the Hastom in planting its cashew trees, the farm can intercrop with soybeans and cassava to earn short term profits.

The farms have also created a platform for individuals and corporations to invest in cashew trees and plantations.

Through its online platform individuals are now investing in cashew trees with a guaranteed 20 percent return on their investment.

“From next month we will start our farm funding, where people will be investing in cashew trees. The price of our cashew tree is N12,500 and we sell a minimum of 10 trees,” he said.

The cashew crop can be grown in the entire South-West, South-South and South-East region, with Enugu with Oyo, Anambra, Osun, and Kogi having the largest production areas.

Nigeria’s cashew is usually harvested between February-June, though farmers stock the crop and export it all year round.

The farm is also heavily investing in setting up a cashew processing factory.

“The bulk of the profit in cashew production is in processing and that is why we intend to start processing our cashew nuts from next year,” Thomas said.

He noted that with more investment in the processing of the crop, the country will create jobs and fully harness the potentials of cashew production.

He urged the government to support cashew growers and processors with single-digit credit.

Also, he advised that attention to be giving to cashew just like other crops.