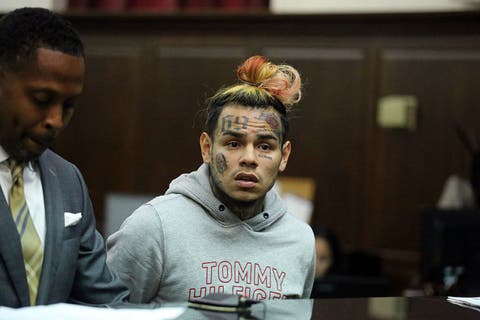 It appears that all may not be hopeless for embattled American rapper 6ix9ine as he just signed a record deal worth over $10 million, while in prison.

According to TMZ, Tekashi officially signed a record deal worth more than $10 million with his former label, 10K Projects. The deal is for two albums, one in English and the other in Spanish.

6ix9ine reportedly plans to resume his music career once he is released from prison, despite his court testimony against his former associates and fellow Nine Trey Gangsta Bloods members.

The New York rapper who is facing 47 years in prison for kidnapping and gang related crimes, testified against his former gang members in hope for a lesser sentence. However, the rapper surprisingly rejected witness protection.

“It looks like he will be making music right away when he comes home. He already contacted a young NYC producer, and someone purchased two beats for him.”

Apparently the rapper has high hopes of a successful comeback after his time in the prison. And his former record label, 10K Projects, are cashing in on that.

dailynaijamode - September 23, 2020 0
Nigerian TV show host and comedienne, Helen Paul is reportedly taking a postdoctoral study in an undisclosed university in America.   The Nation reported that Helen Paul is on the verge of becoming a professor barely a year...
Read more