Sometimes love for each other overtakes two women. Good or bad – not for us to judge. Here is the list of 5 Women Celebrities Married To Women. 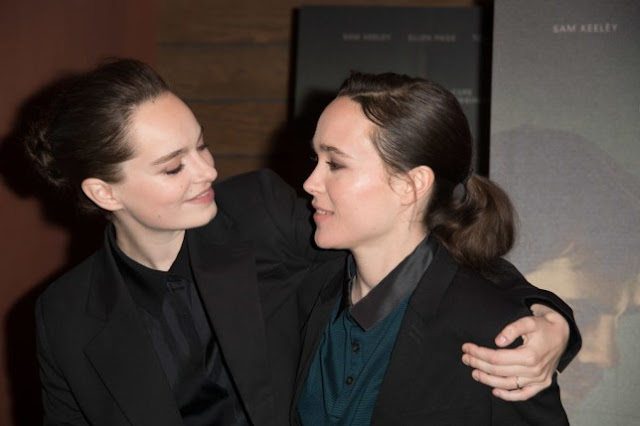 Ellen Grace Philpotts-Page (born February 21, 1987) is a Canadian actress and producer. Her career began with roles in television shows such as Pit Pony, Trailer Park Boys and ReGenesis. She starred in the 2005 drama Hard Candy, for which she won the Austin Film Critics Association’s Award for Best Actress.

Her breakthrough role was the title role in Jason Reitman’s film Juno (2007), for which she received nominations for an Academy Award, a BAFTA, a Golden Globe and a Screen Actors Guild Award for Best Actress and won the Independent Spirit Award, an MTV Movie Award and a Teen Choice Award.

Sara Gilbert (born Sara Rebecca Abeles; January 29, 1975) is an American actress,director, and producer best known for her role as Darlene Conner on the ABC sitcom Roseanne (1988–1997; 2018), for which she received two Primetime Emmy Award nominations. 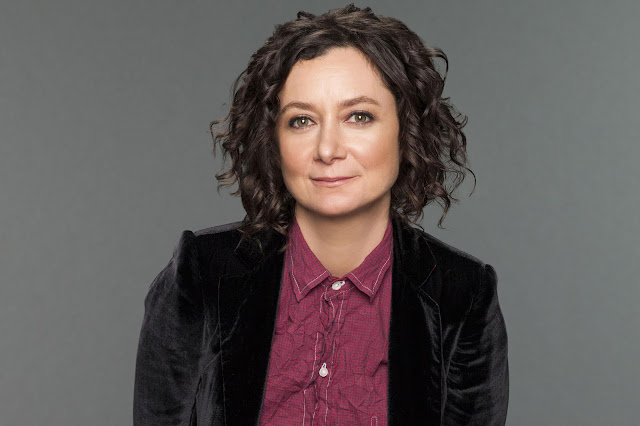 She was also co-host and creator of the CBS daytime talk show The Talk and has had a recurring role as Leslie Winkle on CBS’s The Big Bang Theory.

As a teenager, Gilbert dated her Roseanne (and later The Big Bang Theory) co-star Johnny Galecki (their characters also dated). During their relationship she realized she was a lesbian. She remains close friends with Galecki.

In 2001, Gilbert began a relationship with television producer Ali Adler. They have two children—a son, Levi Hank, born to Adler in October 2004, and a daughter, Sawyer Jane, born to Gilbert in August 2007. For many years, Gilbert remained private about her sexuality, choosing not to publicly discuss her personal life. In July 2010, as she prepared to launch her talk show, The Talk, Gilbert confirmed that she was a lesbian. In August 2011, Gilbert announced that she and Adler had separated amicably.

After nearly four years of dating, the couple wed in an intimate ceremony in Malibu, California. The night was all about friends, family, and of course, music. “We decided that we wanted to be together and enjoy people’s company, because I think people miss that part of their wedding. We wanted to bring everybody with us down the hill and have this communal feeling,” Sara said on The Talk. Just like their proposal, Linda had another musical trick up her sleeve. After serenading Sara with John Lennon’s “Love,” Linda surprised her wife with a performance by Annabella Lwin from Bow Wow Wow, Martha Davis from The Motels, Dale Bozzio from Missing Persons, and Terri Nunn from Berlin. 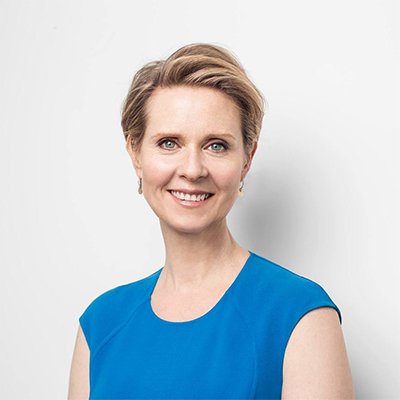 Cynthia Ellen Nixon is an American actor and activist. For her portrayal of Miranda Hobbes in the HBO series Sex and the City, Nixon won the 2004 Primetime Emmy Award for Outstanding Supporting Actress in a Comedy Series. She reprised the role in the films Sex and the City and Sex and the City 2.

In 2004, Nixon began dating education activist Christine Marinoni. Nixon and Marinoni became engaged in April 2009, and married in New York City on May 27, 2012, with Nixon wearing a custom-made, pale green dress by Carolina Herrera. Marinoni gave birth to a son, Max Ellington, in 2011. 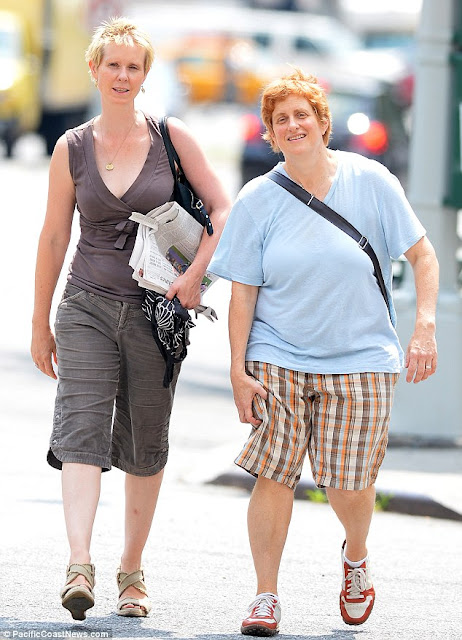 Regarding her sexual orientation, Nixon remarked in 2007: “I don’t really feel I’ve changed. I’d been with men all my life, and I’d never fallen in love with a woman. But when I did, it didn’t seem so strange. I’m just a woman in love with another woman.” She identified herself as bisexual in 2012. Prior to the legalization of same-sex marriage in Washington state (Marinoni’s home), Nixon had taken a public stand supporting the issue, and hosted a fundraising event in support of Washington Referendum 74. 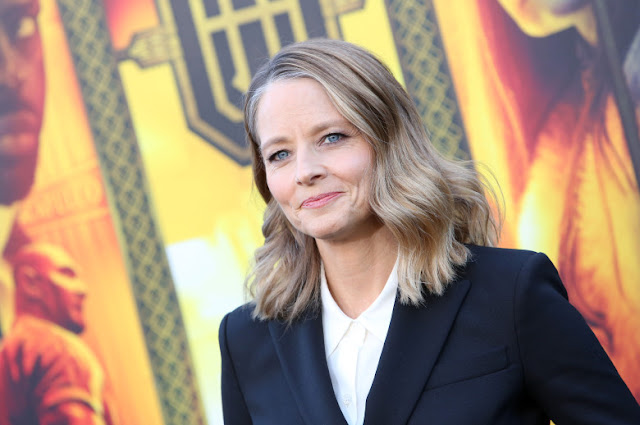 Alicia Christian “Jodie” Foster (born November 19, 1962) is an American actress, director, and producer. She has received two Academy Awards, three British Academy Film Awards, two Golden Globe Awards, and the Cecil B. DeMille Award. For her work as a director, she has been nominated for a Primetime Emmy Award.

In April 2014, Foster married actress and photographer Alexandra Hedison. She stated in 2011 that having children made her take on fewer projects: “It is a big sacrifice to leave home. I want to make sure that I feel passionate about the movies I do because it is a big sacrifice…

Even if you take the average movie shoot of four months – you have three weeks’ prep, press duties here and abroad, dubbing and looping, magazine covers, events and premieres – that’s eight months out of a year. That’s a long time. If you do two movies back-to-back, you’re never going to see your children.”

Foster’s sexual orientation became subject to public discussion in 1991 when activists protesting against the alleged homophobia in The Silence of the Lambs claimed that she was a closeted lesbian in publications such as OutWeek and The Village Voice. 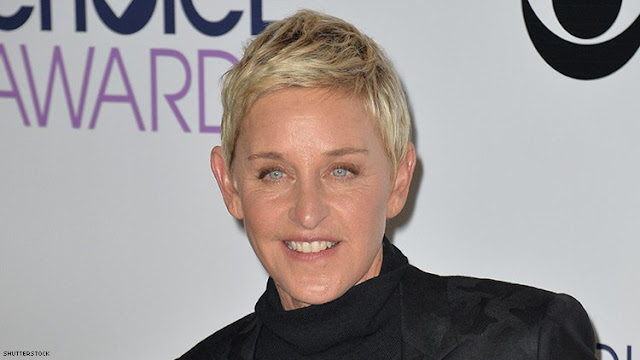 Ellen Lee DeGeneres (born January 26, 1958) is an American comedian, television host, actress, writer, and producer. She starred in the popular sitcom Ellen from 1994 to 1998 and has hosted her syndicated TV talk show, The Ellen DeGeneres Show, since 2003.
In 1997, DeGeneres came out as lesbian. The disclosure of her sexual orientation sparked intense interest by American tabloids. The contentiousness of the media coverage stunted DeGeneres’ professional career and left her “mired in depression”.
In her book Love, Ellen, DeGeneres’ mother, Betty DeGeneres describes being initially shocked when her daughter came out, but she has since become one of her strongest supporters; she is also an active member of Parents & Friends of Lesbians and Gays (PFLAG) and spokesperson for the Human Rights Campaign’s Coming Out Project.
The same year she came out, DeGeneres started a romantic relationship with actress Anne Heche that lasted until August 2000. From 2000 to 2004, DeGeneres maintained a close affair with actress/director/photographer Alexandra Hedison. The couple appeared on the cover of The Advocate after their separation had already been announced to the media. 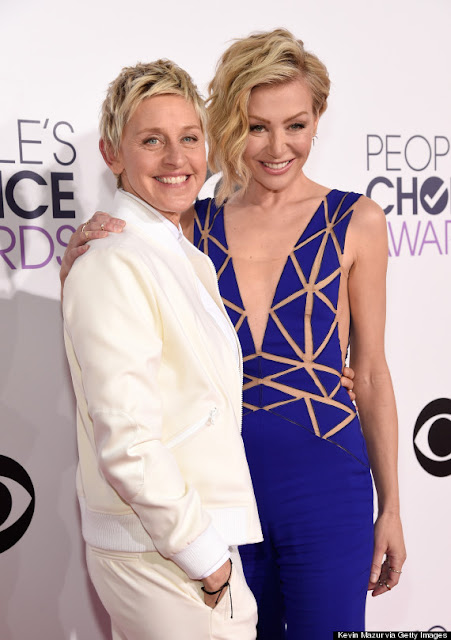 Since 2004, DeGeneres has had a relationship with Portia de Rossi. After the overturn of the same-sex marriage ban in California, DeGeneres and de Rossi were engaged, and married in August 2008, at their home in Beverly Hills, California, where they live with their four dogs and three cats.
The passage of Proposition 8 cast doubt on the legal status of their marriage, but a subsequent California Supreme Court judgment validated it because it occurred before November 4, 2008. On August 6, 2010, de Rossi filed a petition to legally change her name to Portia Lee James DeGeneres. The petition was granted on September 23, 2010.
Source
CopyAMP code

Clash Of The Titans: Meet Ebere Ada Blessing And Chioma Chidimma Vivian, Who is More Endowed ??