Home Headlines 12 Persons Reportedly Burnt To Death In A Tragic Auto Crash In... 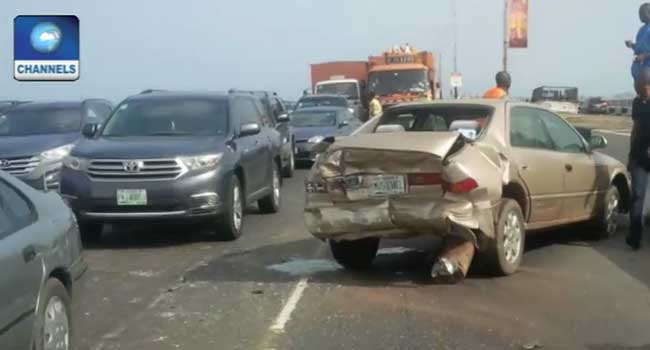 No fewer than twelve persons have reportedly burned to death following a fatal motor accident along the Tombia-Ammassoma road in Yenagoa Local Government Council Area of Bayelsa State.

while eight persons were reportedly burnt to ashes on the spot following an explosion that followed the accident, four others later died on arrival at the Niger Delta Teaching Hospital in Okolobiri.

The incident, which occurred at about 8pm Wednesday night involved a 14-seater passenger bus and a diesel tanker truck believed to be conveying chippings to a construction site around the Amassoma area.

Eyewitness accounts said the incident may have occurred because of the excessive speed by commercial road users of that particular route, adding that there are always deadly accidents on that road.

Quote
“It was a terrible accident, we couldn’t even stand the sight of such flame; there was no way we could help out when the bus was burning. It was all tears, we can’t even assist out, no way to recognise any of them, there’s no means of identification because everything was burnt”

“The Bus and DIESEL tanker collided and the bus burst into flames, everybody in the bus was trapped and burnt beyond recognition except three survivors. The three survivors however later gave up the ghost”.

Officials of the Federal Road Safety Corps (FRSC) confirmed the burnt passengers were unrecognized and couldn’t immediately be identified, “when we arrived at the scene at about 10pm there was nothing we could do”.

The FRSC officials confirmed that preliminary investigation showed that it was over speeding on the part of the diesel truck,” we believe the truck driver removed the plate number and escaped from the scene of the accident. But the passenger bus plate number is VA6243”

Also speaking, the spokesman of the Bayelsa State Police Command, Asinim Butswat, confirmed the incident and said the scene was gory and horrible,”